Achievements of Imran Khan which seemed impossible at first 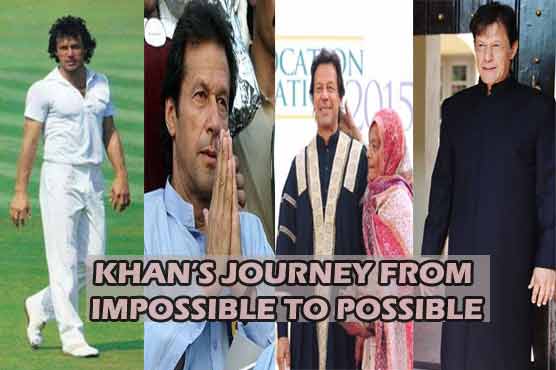 Achievements of Imran Khan which seemed impossible at first

Imran Khan was mocked at different stages in his life, but he rose to the occasion.

(Web Desk) – Imran Khan has become 22nd Prime Minister of Pakistan. He put 22 years of his life to gain the position he stands at this moment. Achieving what Imran Khan has gained is no less than a miracle. His struggle is a story of a man who remained persistent and stood to face numerous challenges. He was mocked at different stages in his life, but rose to the occasion and covered his journey from being a cricketer to premier of nuclear state of Pakistan. Following are some of his achievements, which did not seem to be possible but he made them possible through ceaseless effort and determination.

In 1982, he became Captain of Pakistan cricket team. He performed quite remarkably as fast bowler and all-rounder against England; it was owing to this that Pakistan beat England on its own home ground. It was first Test victory after 28 years.

Debut in Pakistan cricket team but failed miserably at first

Imran Khan joined Pakistan team with an ambition to make Pakistan cricket team one of the leading ones, but his start was not impressive and he failed to impress his seniors. Imran Khan in various speeches has said that his friends and foes discouraged him, saying he can never become a good cricketer. He stayed consistent and made his debut in One Day International (ODI) in 1974.

Under his captaincy, Pakistan usually won from its rivals, India especially. Photo: Pinterest

In 1982, he became Captain of Pakistan cricket team. He performed quite remarkably as fast bowler and all-rounder against England; it was owing to this that Pakistan beat England on its own home ground and it was first Test victory after 28 years.

Under his captaincy, Pakistan usually won from its rivals, India especially. Sanjay Manjrekar in his autobiography "Imperfect" claimed that he might have been a better cricketer if Imran Khan had led him. According to former India spinner Maninder Singh, he (Imran Khan) was captain, coach, chief selector everything. It was Imran Khan whose captaincy led cricket team towards production of world-class bowlers like Wasim Akram, Shoaib Akhtar and others. The historic moment of Pakistan winning world cup against England was under his leadership. Pakistan became 1992 World Cup campaign. Imran Khan played 139 matches; won 77, lost 57 and with one tie.

Imran Khan in his various speeches has uttered the fact that out of 20 professional and expert doctors, 19 of them said “NO” to the construction of Shaukat Khanum Memorial Hospital. They were of the view that it would not be a feasible project especially in countries like Pakistan. Imran Khan, armoured with spirit and willpower and with a pious aim to construct a hospital on the name of his mother who suffered and died of cancer, decided to go for it. He went almost everywhere in and out of Pakistan to persuade Pakistanis to contribute for this apparently impossible task.

Imran khan led the construction of Shaukat Khanum Hospital in the loving memory of his mother. Photo: File

At last, he did what even Government of Pakistan could not have done and inaugurated the very first hospital on December 29, 1994. The other in Peshawar became operational on the same day December 29 but in 2015. The trust is providing diagnostic and therapeutic facilities to cancer patients in Lahore, Peshawar and soon in Karachi too.

Construction of Namal University also seemed an impossible task as the terrain where it was supposed to be established was not suitable, although surrounding scenery was eye-catching. 90 per cent of students get financial support from the institution. It is affiliated with University of Bradford, UK, and was inaugurated by Syed Yousaf Raza Gillani on April 27, 2008. Undoubtedly, government provided financial and non-financial support to college and even to SKMT but it was Khan’s dedication that they are efficaciously operating unlike any other government institution.

ALSO READ: Overseas Pakistanis pinning hopes on Imran to deliver on his promises

Namal University, one of the world class universities in Pakistan, is imparting knowledge majorly on scholarship. Photo: ImranKhan.Official

Imran Khan formed Pakistan Tehreek-e-Insaaf (The Pakistani Justice Movement) PTI on April 25, 1996 with an aim to dispense justice on people’s doorstep. People undoubtedly have been craving for free and easy-to-access justice. Khan’s entry into politics was not plain sailing. He was criticised for various reasons, including his marriage with Jemima Khan. He was termed as “Yahoodi agent” for his marriage with a Jew, even though she had converted to Islam. Critics made his marital life impossible to live; unfortunately, at this stage, he failed and divorce with Jemima Khan was the result. Imran Khan has often said that this was the most tragic moment of my life and my opponents have a lot to do with it.

Imran Khan’s marriage with Jemima Goldsmith failed. He has termed it one of the tragic moments in his life. Photo: File

The public gathering that gave push to Khan’s movement was that of rally at the Minar-e-Pakistan ground in Lahore. It was the turning point in party’s history and proved to a gigantic victory. Lahore was flooded with people, the number, no one expected. The gathering cracked the wall PML-N’s fortress.

In 1997 general election, he could not attain any seat of National Assembly. His party was quite small, consisting of few people. In 2002 general election, only Imran Khan could secure victory from his paternal seat of Mianwali. PTI boycotted 2008 general election. It was a time when no one was ready to take PTI’s ticket. But the Tehreek gained momentum around 2010, Imran Khan through his continuous struggle and not resting on his laurels started motivating people and changing their minds concerning the deteriorating economic situation and role of corruption in it.

Imran Khan tearing his nomination paper at a press conference in 2007. Photo: Insaf.pk

The public gathering that gave push to Khan’s movement was that of rally at the Minar-e-Pakistan ground in Lahore. It was the turning point in party’s history and proved to a gigantic victory. Lahore was flooded with people, the number, no one expected. The gathering cracked the wall PML-N’s fortress.

Minar-e-Pakistan gathering of PTI proved a huge success for the party and it gave it boost on national political horizon. Photo: File

Although there were ample chances of PTI’s winning the general elections 2013, but failed by gaining only 27 general seats. Khan utterly believed that his party won but due to massive rigging PTI was barred to hold power. Khan stayed consisted along with other leaders of his party. Revelations in Panama Papers attested his view of corruption committed by his rival Nawaz Sharif. He fought legal battle against Sharif and had him in prison for ten years along with her daughter Maryam Nawaz.

There was not even a single moment during 2013 to 2018 whereby he did not mention rigging and Panama papers in his public discourse. At last the moment came when PTI bagged 116 seats in 2018 General Election, leaving everyone behind. On August 17, 2018 in a decisive session of National Assembly Imran Khan gained 176 votes, more than the simple majority which is 172, and on August 18, 2018 he sworn in as 22nd Prime Minister of Pakistan.

He is PM now; it’s a reality

From PML-N, PPP, and almost every other political party, Khan faced severe bashing. PML-N leaders even said that there is no line of premiership on Khan’s palm. Then there comes the time that he is Prime Minister of Pakistan now. Setting aside his political beliefs, everyone irrespective of political and ideological differences, should learn from his life. His story gives a lesson that nothing is impossible in this world, the only thing required is to stay persistent in the face of difficulties.