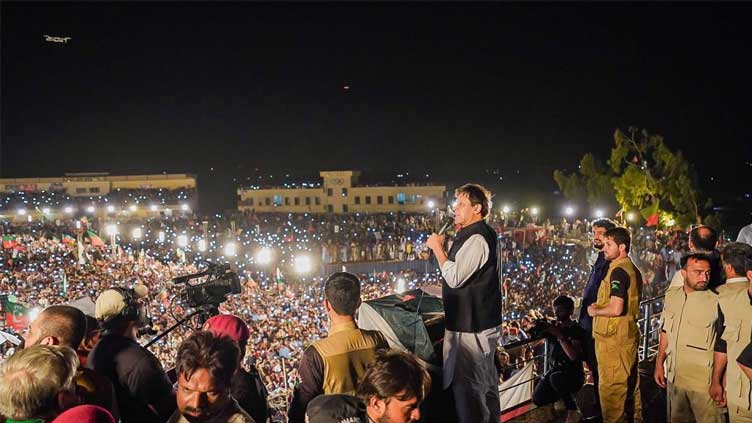 “Thankfully, the supreme court has rejected votes cast by the turncoats,” Khan said while addressing a rally in Kohat.

Imran Khan said that Shehbaz Sharif is only expert at polishing boots, that too the US ones. He said the parties in power, especially the PML-N, have been badly exposed as they couldn’t control inflation nor were able to give any relief to the people of Pakistan.

“Shehbaz Sharif is only expert at polishing boots, that too the military and US ones. Now, they will go to US and beg more money by saying that if you (the US) don’t support us, Imran Khan will come back in power,” Imran Khan told a mammoth crowd.

“Shehbaz Sharif desperately wanted to become the prime minister as he never came into power before unlike Nawaz Sharif,” he said. He said that the lights were not installed properly in the rally, adding that this is the biggest rally in the history of Kohat.

During the rally, the PTI workers chanted slogans of “diesel, diesel” to which the PTI chairman said that the imported government is going to increase the prices of petrol and diesel.

Imran Khan went on to say that Pakistan Peoples’ Party (PPP) Asif Ali Zardari is enjoying the situation as PML-N is being criticised by the people for record inflation.

“People used to say that Shehbaz Sharif gets up at 7 in the morning and does great work,” he said and added where is he [PM] now when the inflation is surging. He said the present rulers asked him to impose lockdown during his government, while Shehbaz Sharif and Bilawal Bhutto Zardari criticized him [Imran Khan] for not imposing lockdown in the country. “The world praised Pakistan s Corona policy, adding that PTI government saved the people and country s economy during Coronavirus pandemic.”