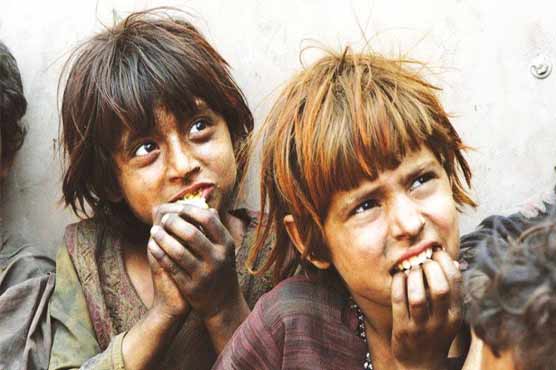 Poverty in Pakistan is affecting more people than expected and is worst menace than terrorism.

(Web Desk) – Today marks “The International Day for the Eradication of Poverty”; ceremonies will be held worldwide. The theme for 2018 is “Coming together with those furthest behind to build an inclusive world of universal respect for human rights and dignity.” Celebrating this day was initiated from France in 1987 where one hundred thousand people under the leadership of prominent social leader Father Joseph appeared on streets in solidarity with the poor.

According to Oxfam, 80 per cent of the entire population of the world earns less than $10 a day; 1.6 billion people or 1/4 of all humans beings have no access to electricity.

United Nations adopted this day on 1992. Poverty indeed is engulfing a huge number of people everywhere in the world. The poor are forced to commit suicide or indulge into crimes for their survival. According to Oxfam, 80 per cent of the entire population of the world earns less than $10 a day; 1.6 billion people or 1/4 of all humans beings have no access to electricity.

According to World Bank, poverty did eradicate in world but its rate has been declined. It should be at least 3 per cent to curb extreme hunger around the world till 2030. Photo: File

Effects of industrialization are yet to benefit the poor living especially in the developing parts of world, countries of Africa and Asia to be specific. Although living standard of people rose in some countries, but in reality its speed is too sluggish that it would take centuries to eradicate extreme hunger. The dream of getting rid of hunger till 2030 will not be achieved with this pace.

Pakistan, where food is in abundance but hunger thrives

According to facts and figures of Ministry of Planning, Development and Reform, around 40 per cent of the entire population lives under multidimensional poverty, lack of financial resources being one of the many factors. There are various causes of hunger and major one of them is unequal distribution of wealth. Those in power keep on gaining more and more resources while the poor get nothing.

Most of Pakistani population is facing worst hunger; while only a small portion of population, too affluent and powerful, has piled up resources from even ill-gotten ways. Photo: File

ALSO READ: Rampant poverty in Pakistan when world is progressing at a rapid pace

UN Secretary-General, António Guterres in his recent statement on this day has rightly said, "Let us remember that ending poverty is not a matter of charity but a question of justice." Pakistani Nation is generous in giving charity but eradicating poverty will require top to down approach. Government will require efficient policies which school the children and employ the youth. Charity, on the other side, is not the sustainable solution.