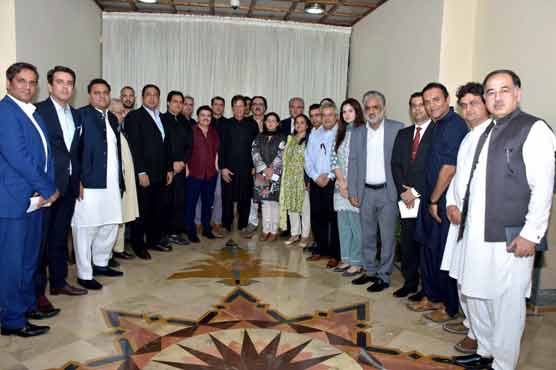 Journalists had candid discussion but only with a glass of water; austerity drive in action.

(Web Desk) – A delegation of renowned journalists met the newly elected Prime Minister of Pakistan Imran Khan. Certain messages were conveyed by PM through the meeting. The center of concentration of his conversation was accountability and its odd relation democracy. When accountability drive commences, dangers for democracy raise their head. No minister is permanent one, they will be judged in accordance to their performance, Imran Khan clarified. Accountability will happen across the board.

PM Imran Khan had a very candid talk with journalists. He conveyed some thoughts while answered to the questions of journalists patiently. Photo: Twitter

ALSO READ: Everyone will be held accountable, assures PM Imran

The other essential thing which everyone wanted to clarifications from Imran Khan was the transferring of District Police Officer (DPO) Pakpattan Rizwan Gondal. According to him, he and his better half have nothing to do with this matter which has created doubts even among the supporters of PTI.

He was not aware of the apology that DPO was forced to tender to Khawar Maneka. Chief Secretary, no one else, was asked to consider the matter. Now that apex court has taken up this matter, let’s wait for the verdict.

ALSO READ: Everyone will be held accountable, assures PM Imran

On the issue of helicopter, he said it is inexpensive and superior as compared to other means of transportation. To a large extent, this is true. But this really does not justify the claim made by Information Minister Fawad Chaudhry that one kilometer journey of helicopter costs only Rs55. Imran Khan’s claims of convenience concerning the use of helicopter is right; using helicopter is more expedient and hassle-free. Fawad Chaudhry’s claim was taken quite lightly on the social media; resultantly, it produced criticism not only for him but also for PTI.

On the other side, another Vital development occurred during the meeting. French President Emmanuel Macron was calling PM Imran Khan but he kept him on hold. It was an unscheduled call which was not taken seriously. Foreign Secretary Tehmina Janjua asked the PM to attend it but in vain. At first there were doubts about this incident, but senior journalist Hamid Mir confirmed the event. Here is his tweet which also fetched attention of Twitterati.