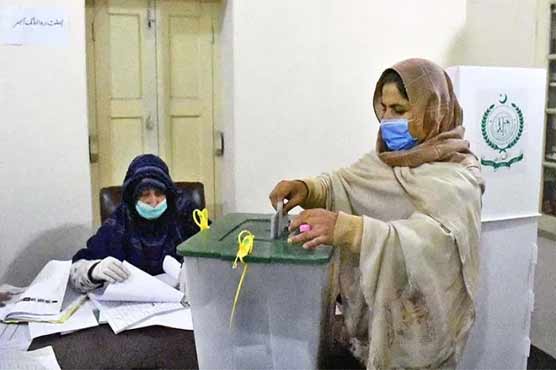 GILGIT (Dunya News) – Results for the general elections of Gilgit-Baltistan Legislative Assembly (GBLA) have started pouring in as counting is underway across the region after a daylong polling in the landmark general elections held under tight security.

The vote count has begun, a process that may last until the next day. Results of the election that allowed people to elect candidates for the GB Assembly is expected to be announced Monday.

The polling which started at 8am continued until 5pm without any break. There were 24 seats for the contest but polling on one seat was postponed, leaving 23 seats up for grabs. As many as 330 candidates, including four women, were in the contest.

Elections had been delayed in GBLA-3 following the death of PTI Gilgit-Baltistan President retired Justice Jaffer Shah from coronavirus. At least 1,26,997 fresh voters have also used right of vote in general elections of Gilgit-Baltistan.

The territory of Gilgit-Baltistan was granted limited autonomy in 2009 after the then-President Asif Ali Zardari signed the Empowerment and Self Governance Order in a bid to empower its over 1 million population. In November 2020, Prime Minister Imran Khan announced that Gilgit-Baltistan would be given the status of a provisional province, and the process to fully convert it into an actual province is currently underway

PPP won the first elections in 2009 while PML-N emerged victorious in the second election, winning 22 seats out of a total of 33. The 2020 polls were originally scheduled to be held in July but had to be postponed due to the COVID-19 pandemic.

Gilgit Baltistan has a total of 24 constituencies while its assembly has 33 seats. The political candidates will contest for 24 out of 33 seats while the remaining seats are reserved for women (6) and technocrats (3). According to the Election Commission of GB, the total number of registered voters is 745,361, of which 339,992 are women.

Nearly 1,234 polling stations have been set up in 24 constituencies, of which 415 had been declared extremely sensitive. Police, GB Scouts, the Rangers and FC personnel would be deployed to ensure a smooth election process.

GB caretaker Chief Minister Mir Afzal had earlier announced that Pakistan Army’s support would not be sought for the upcoming elections.

The local administration has directed to ensure implementation of standard operating procedures (SOPs) to prevent spread of coronavirus outbreak as voting for the general elections in Gilgit-Baltistan is underway today.

The polling staff and voters have been ordered to wear face masks and take other precautionary measures to curb covid-19 epidemic.

The security personnel have also been directed to implement SOPs.

Asad Umar, in a tweet, said that after historic federal packages for Karachi and South Balochistan, now work will start on development of Gilgit-Baltistan.

Firdous Ashiq Awan, in a tweet, said that first priority of government in new Gilgit-Baltistan will be to end sense of deprivation, transfer of power to lower levels of government and granting people their rights.

She further said that today’s transparent elections will be the start of development and prosperity in Gilgit.

Pakistan Muslim League-Nawaz (PML-N) vice president Maryam Nawaz has said that the government of Pakistan Tehreek-e-Insaf (PTI) has to be sent packing.

In a post on social-networking website Twitter, the PML-N vice president claimed the incumbent government is so much afraid of PML-N that it had arrested leaders in Gilgit-Baltistan before every rally.

The selected prime minister became nervous over the public gatherings of opposition leaders for Gilgit-Baltistan elections, she added.

Enthusiasm of GB s people a testament to their commitment to democracy: Bilawal

Chairman of Pakistan People’s Party (PPP) Bilawal Bhutto Zardari said that enthusiasm of people of Gilgit-Baltistan (GB) during election day is a testament to their commitment to democracy.

Bilawal Bhutto Zardari, in a tweet, lauded people for actively participating in the voting process and while urging the election commission to ensure that every vote is cast and counted, said that the commission must not fail the people.

The CEC inspected arrangements at the control room while Gilgit-Baltistan’s chief secretary also briefed him on the occasion.

Raja Shehbaz expressed satisfaction over the performance of the local administration in conducting the polls.