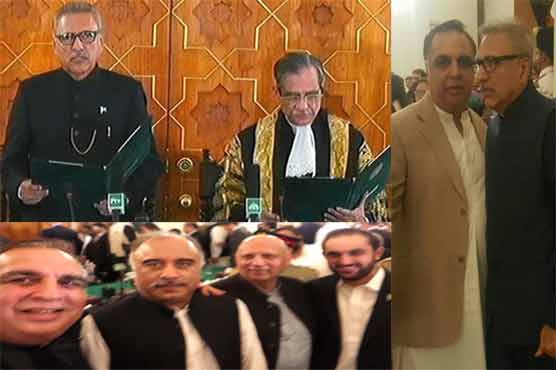 Another historic day for PTI, struggle of Arif Alvi for PTI pays off well today.

(Web Desk) – Arif Alvi has sworn in as the 13th President of Pakistan. He has been a close friend of Prime Minister Imran Khan since the establishment of the party, Pakistan Tehreek-i-Insaf (PTI). He has borne a lot of adversities for the sake of party. At one time, he got shot during a protest on the right hand in Lahore. He has saved that bullet which explores his struggle for the sake of democracy. Arif Alvi’s incumbency to presidency also shows that PTI awarded one of the old members. Today it was a jolly day for PTI and its leaders. One can view this from the pictures of swearing-in ceremony. Chief Justice of Pakistan took oath from Arif Alvi.

Almost every ministers including the senior members of the party including Shah Mehmood Qureshi, Chaudhry Sarwar and others were present. Photo: Screenshot

Prime Minister Imran Khan must be very joyous today as his one of best friends has become President. Photo: Screenshot

Imran Khan earlier shared an old picture of him with Arif Alvi captioning, "When our world was younger! Congratulations to Dr Alvi on being elected President."

Foreign dignitaries from China, Saudi Arabia, and UAE sitting side by side with Defence and Railway Ministers respectively. Photo: Screenshot

Imran Ismail, Governor Sindh, shared quite an interesting picture on Twitter in which all four governors were depicted. He captioned it, “All 4 Governors together, at Presidents oath taking ceremony.” Photo: Twitter

There were a number of other national and international personalities too who took part in the ceremony. The ceremony ended with jubilation on the faces of PTI’s leaders. Now that PTI holds power in the centre and Punjab, KP, and Balochistan, it is time to deliver. People are suffering in the hands of social ills including unemployment and rising number of crimes, they want newly-elected leaders to join them on fields. Time will tell how solid and true claims of PTI were.