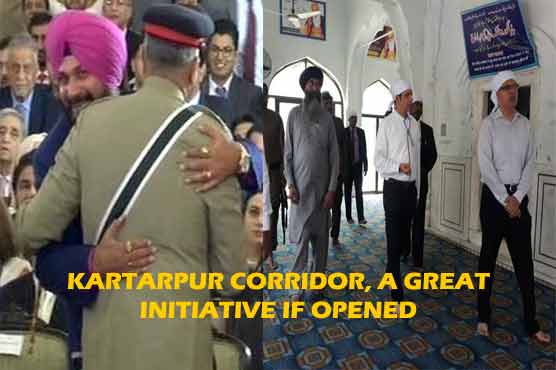 Imran Khan unlike previous Prime Ministers has ability to solve matters of significance with India.

(Web Desk) – It seems arch-rivals Pakistan and India are getting closer to each other day by day. Imran Khan’s premiership can help maintain relations with India. The first major breakthrough that has been on air is related to the opening of Kartarpur corridor. Punjab Minister Navjot Sidhu’s coming to oath-taking ceremony of Imran Khan paved the way for melting the ice on this subject.

Interestingly, Indian Punjab Assembly has passed resolution to open Kartarpur corridor. It can be termed as the significant improvement towards better relations between two countries. Opening of this border will definitely be a vital step towards the progress in their relations and will be a ray of hope in bringing them together.

Chief of Army Staff, General Qamar Javed Bajwa, showing an optimistic and friendly gesture and even without Navjot’s demand assured him to open up this part of border for the convenience of Sikh pilgrims on 550th birth anniversary of Guru Nanak Dev. This corridor will connect Kartarpur Sahib to Dera Baba Nanak in Gurdaspur. Kartarpur Sahib is the place where Guru Nanak Dev spent 18 years of his life. There are ample chances that negotiation to open this borders will prove fruitful.

Though talks to open this corridor was held in Pervez Musharraf’s reign too, but it could not be opened. Indian cold behaviour was a key hurdle. Photo: File

Interestingly, Indian Punjab Assembly has passed resolution to open Kartarpur corridor. It can be termed as the significant improvement towards better relations between two countries. Opening of this border will definitely be a vital step towards the progress in their relations and will be a ray of hope in bringing them together.

Chief Minister Captain Amarinder Singh speaking in the Vidhan Sabha during the motion to pass resolution for Kartarpur corridor. Photo: The Tribune

Though from Indian Punjab, favourable hints can be sensed but at centre the government of India will require to take serious steps. Instead of stalling talks with the lame excuse of terrorism, Indian government should come to the table. Regarding this border, Punjab CM Amarinder Singh has already stressed over Sushma Swaraj to negotiate with her counterpart to take up this matter. Negotiation should bring positive change in the lives of people living both sides of the border. Factually speaking, Imran Khan coming into power and Pakistan taking edge to open borders to ease the Sikhs has indeed baffled and vexed many in India.

Border opening will definitely ease the commuters, but this will only happen when Indian government will take it serious. Indian people and media since the rise of this development, Sidhu meeting COAS and latter s desire to open Kartarpur Corridor, are giving their mixed reactions. Sikh community is quite jubilant and hopeful that this border will be opened at the earliest, while Hindus and supporters of BJP and even Congress do not seem to be having any interest at all.

Imran Khan does seem highly interested in resuming talks with India and that was why in this victory speech he said Pakistan will come two steps further for the development of sub-continent for one step taken by India. He also offered assistance to India for heavy rainfall in Kerala that has caused havoc. This offer was appreciated from various corners, but Indian federal government did not heed to it and decided to reject it (the aid) not only from Pakistan but also from other countries.