Joint Opposition is not that joint against PTI 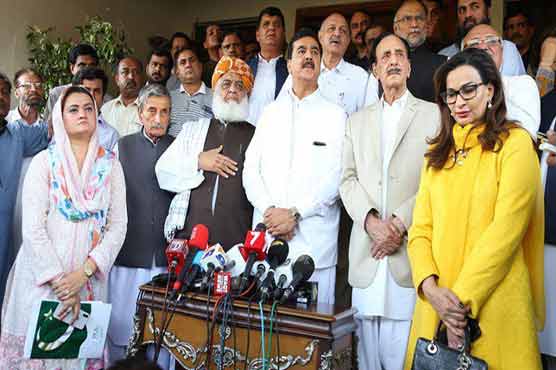 Joint Opposition is not that joint against PTI

Joint Opposition does not seem to be united for a longer period of time; clashes are evident.

(Web Desk) – Joint Opposition which was formed after General Election 2018 seems to be dispersing now. Leaders from Pakistan Muslim League-Nawaz, Pakistan People’s Party, Awami National Party, Pashtunkhwa Milli Awami Party, Qaumi Watan Party and Muttahida Majlis-e-Amal joined hands in hands with each other to tackle Pakistan Tehrik-e-Insaf and its allies. Although they placed joint candidates for speaker and deputy speaker, voices of contradictions are quite evident. Indeed they voted for joint candidates too, but now PPP is not ready to accept Shehbaz Sharif as premier candidate.

Parties like Pakistan Muslim League-Nawaz, Pakistan People’s Party, Muttahida Majlis-e-Amal, and the like got together to bring PTI down, but failed miserably especially after losing speaker and deputy speaker elections. Photo: File

The real opposition, in true meaning, will only be one party, and it is to be seen which it is going to be.

Politics in Pakistan is filled with variations; nobody knows what will happen the next moment. Parties which were not ready to talk with each other and were considered ideologically dissimilar started collaborating against another force, PTI to be precise. Collapsing of Results Transmission System (RTS) system, delay in announcement of the results, etc. proved a blessing in disguise for PML-N and PPP; they came closer. It was settled that the candidate for premiership will be from PML-N. For speakership and deputy speakership of national assembly, they will be from PPP and MMA.

Senior expert/analyst Salman Ghani is of the view that even though Asif Ali Zardari is in the parliament, he and Bilawal Bhutto will not be able to perform miracle. Indeed PPP has lost its charisma and no more a crowd pullers, which is mainly because of its friendly politics inside and out of parliament.

PPP has been tagged as friendly opposition in the past and rightly so because of the fact that it kept on focusing only on news shows to present its viewpoint while PTI fought an extended legal battle against the then ruling party PML-N. It was due to Imran Khan’s political struggle that Nawaz Sharif was indicted in Panama Papers. PPP seemed to be the right hand of PML-N. PTI never rest on its laurels and carried on its political struggle in assemblies and on roads. Frankly speaking, this was the reason, people liked it. Those who were distressed from PPP’s friendly opposition considered PTI a better option, they even included Jiyalas. PPP’s Friendly Opposition view damaged the political entity to the extent that it shrunk to only Sindh.

Senior analyst Salman Ghani is of the view that even though Asif Ali Zardari is in the parliament, he and Bilawal Bhutto will not be able to perform miracle. Indeed PPP has lost its charisma and no more a crowd pullers, which is mainly because of its friendly politics inside and out of parliament.

The charisma that PPP has once seems dying down and politicians including from PPP believe Zardari to be the obvious reason. Photo; File

PML-N towards gaining its lost glory

It is high time PML-N as a party take stand by itself. PTI did not adopt friendly opposition policy initiated by PPP and resultantly got what it deserved in general election 2018. For PML-N there are still chances of regaining the lost position in the centre. It bagged quite impressive number of votes, 12.89 million. Shahbaz Sharif will have to act as a leader. Indeed, he will have to put his confidence on new political leaders. PML-N as a party needs to be an active opposition. Regarding the contemporary joint opposition, it does not seem to be united for a longer period of time; clashes are evident.