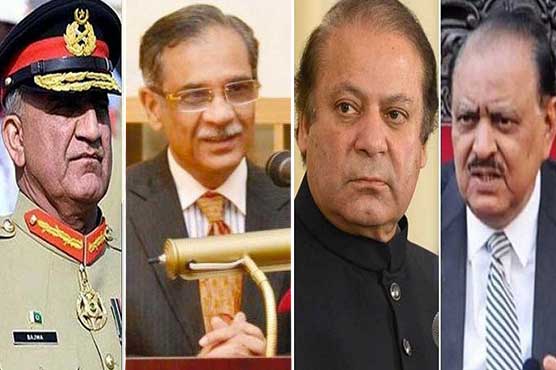 ISLAMABAD (Dunya News) – The stunning performance by green shirts has not only impressed the cricket fans around the world but also forced the national leadership to laud their effort. With Pakistan defeating England and reaching the final match of ICC Champions Trophy 2017, Prime Minister Nawaz Sharif and the Chief of Army Staff (COAS) Qamar Javed Bajwa has congratulated the Sarfraz XI on their big win.

They expressed good hopes for the Champions Trophy final after praising their brilliant performance in the semi-final. The premier suggested the team to continue with their good form and bring the trophy home. President Mamnoon Hussain too celebrated Pakistan’s win over England and declared it a result of nation’s prayers. "Good luck for the final," said the army chief.

BOYS in GREEN did it in STYLE ... a superb team performance ... Mubarak!!!

Moreover, Pakistan Tehreek-e-Insaf (PTI) Chairman Imran Khan also praised the team Pakistan as he took to Twitter. He went on to expect the thrilling Champions Trophy final between India and Pakistan, subject to Bangladesh s defeat.

Now the whole nation awaits our team making amends in the final against India - if they defeat Bangladesh https://t.co/abTx4b0vo2