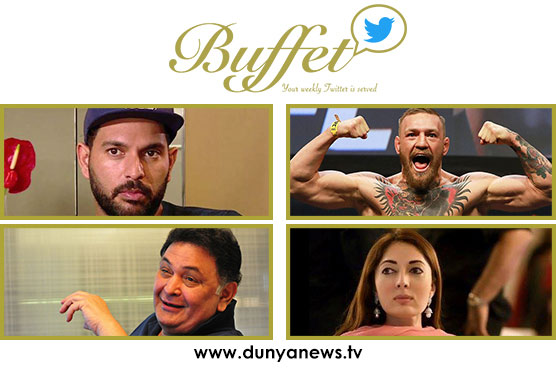 (By Abdullah Ejaz) – This week’s Twitter buffet is served.

From now on, we’ve got your entire week on the go at one place as far as entertainment, politics, sports, gossips and offbeat happenings are concerned.

Your buffet is to have every Saturday at 09:00pm, all the Twitter chirps of the entire week that you do not want to miss.

Here at the Twitter buffet corner, we have some core beliefs, rules and expectations:

So, Zaheer Khan has apparently begun to Twitter a lot after engagement to Sagarika Ghatge. This week we saw the former Indian bowler give a shout out to Yuvraj Singh over social media, only that it could have bruised Yuvi a bit.

Zaheer commented on Pakistan Vs Sri Lanka on June 12 in Champions Trophy 2017 stating: “ 62 needed of 90 with 3 wkts in hand , very interesting to see how it finishes from here ... #CT17 #SLvPAK,” and Yuvraj quipped, " Oh tu bade tweet kar reha aj kal ki gal ?" To which daredevil Khan replied: “I am tweeting like you @YUVSTRONG12 but why are you fielding like me ??? Hahaha.”

It definitely wasn t a burn and we are sure it was taken in the top fun spirit.

By the way, find out who Yuvi thinks is the biggest miser in Indian team. An interview that is nothing but a real chat that gives viewers an insight into the person s life.

Shahrukh and Imtiaz Ali released a couple of posters of their upcoming venture ‘Jab Harry Met Sejal’ this week, that is slated for a release in August. The title though was announced with much delay.

Apparently, Ranbir among other people who had visited the sets during film s shoot had suggested the tile that he thought the film should be released with. Dropping by one another s sets is nothing but normal we know.

So what happened was Ranbir and Katrina, co-stars of upcoming Jagga Jasoos were sitting in a vanity with Shah, Anushka and Ranbir in Mehboob Studios in Mumbai when the actor proposed this title to the team.

Recently, at the release of one of Jasoos’s songs tilted Ghalti Se Mistake, Ranbir let out that the team had laughed at him at the time but since his title has been finalised, he is entitled to a reward.

However, Shah was quick to push the budding desire back in.

Conor McGregor Vs Floyd Mayweather is on!

Ecstatic and cheering. Burnt out by the end of the week, we felt rejuvenated when McGregor Vs Mayweather was made official. It is the fight of the century to put it rightly. Mixed Martial Arts Vs boxing. It is going to be epic.

THE FIGHT IS ON. pic.twitter.com/KhW0u3jRft

In the first ever, sitting Prime Minister of Pakistan appeared before a Joint Investigation Team to prove his innocence against corruption allegations.

This week, on Thursday, the premier was summoned to have his statement recorded at Federal Judicial Academy.

After three hours of hearing, the premier returned to the PM House and chaired a meeting of the ministers to take them in confidence over the issue. Meanwhile, the social media brigade of the ruling party shared pictures of the meeting getting a straight lesson from PTI’s counter force which stated:

So Ali Zafar has betted over Pakistan Vs India final. If Pakistan bring Champions Trophy 2017 home for the first time in its history, Priya Gupta who is a producer at music conglomerate TSeries would have to come to Lahore to treat Ali Zafar to a dinner at a restaurant of his choice.

The apparent friends were seen chatting it away on Twitter where the bet was called on.

Sharmila Farooqi is a straight shooter. She belongs to a politically charged family and the lady makes sure her two cents are given a thought about once heard.

Khawaja Asif was hit for a sixer by Farooqi for reverting back to his misogynistic ways. The minister had referred to Firdous Aashiq Awan on Twitter as “dumper”. He revisited “tractor trolley” for Shireen Mazari.

But Farooqi was not to deal with it with slightest of leniency this time, she wrote back: “You have names for female members of your family also? Despicable”

There is silver lining for IK, Tractor trolly & newly acquired dumper can b used for hauling political garbage..no additional effort/expense

You have names for female members of your family also? Despicable https://t.co/Bn3mnvq1nh

Eoin Morgan was under the fire after his “lame excuse” for losing to Pakistan in Champions Trophy 2017 semi-final.

The English skipper observed that Pakistan was used to the pitch since it had played Sri Lanka the same venue two days ago whereas Britons were new to the bounce the pitch had.

Waqar Younis was not going to have this from Morgan.

So Shahid Afridi, the former Test, ODI and Twenty20I captain and face of several brands was hosted a Sahoor by TV anchorperson turned actor Sana Bucha at her pad among several friends.

However, it did not go down well with the conservative section of the social media for they judged the two known figures of their society.

So much so that Afridi had to just slide it out there that Bucha and him had what siblings have with one another.

Afridi wrote : “Thank you sister @sanabucha for the fantastic Suhoor last night,it was a pleasure catching up with the faces of Pak Entertainment Industry”

Sana Bucha was not late on the que and responded: “V may not be of same blood but nothing is better than a man who doesn t only call U his sister but treats u like one.Lala! @SAfridiOfficial”

V may not be of same blood but nothing is better than a man who doesn t only call U his sister but treats u like one.Lala! @SAfridiOfficial https://t.co/z8VaRZSFrr

Chintu Kapoor is followed by Pakistan but for the ‘wrong reasons’

Chintu Kapoor took over all the entertainment websites and was mentioned on many television analyses for the passion he let out for cricket on the social media.

Though the Indian actor is long known for digressing from his status in a star-worshiping society to interact with fans as well as responding to haters on Twitter, he just took the cricket fanaticism to another level with some rants and some witty remarks.

After the actor wrote on June 17, “Too many provocations made me say things,” we conclude this week’s buffet with looking at some of his older tweets:

Jagga Jasoos we r quits now!!! Hisaab barabar. Give @karanjohar his share for the ‘Jab’ part in JHMS please. pic.twitter.com/gPtrUdwedD

Even though it is not the case, we are going to assume that the wait is on for another Twitter Buffet serving. Coming Saturday 09:00pm.

No, that was just a one-timer, won’t be there the next time.

Remember not to be taken seriously?

Sarfraz Ahmed to be appointed as Test captain: reports