'No war': Sport turns blue and yellow for Ukraine 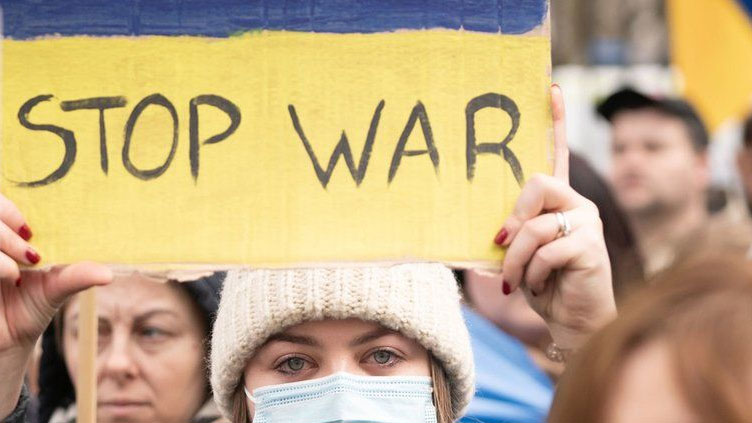 'No war': Sport turns blue and yellow for Ukraine

Players draped in Ukraine flags, pledges of aid and placards demanding No War and United in Peace

PARIS (AFP) - Players draped in Ukraine flags, pledges of aid and placards demanding "No War" and "United in Peace", international sport turned blue and yellow in support of Ukraine this weekend.

Novak Djokovic pledged financial support to Ukrainian tennis player Sergiy Stakhovsky, who has joined the fight to protect his country from the Russian invasion.

Stakhovsky, who famously beat Roger Federer at Wimbledon in 2013, last week said he had signed up for Ukraine’s military reserves.

The former world number 31 on Sunday posted a screenshot on Instagram of a WhatsApp conversation with Djokovic.

"Thinking of you... hope all calms down soon," read a message from the Serbian 20-time Grand Slam champion to Stakhovsky.

"Please let me know what would be the best address to send help. Financial help, any other help as well..." wrote Djokovic who has amassed more than $150 million in his career.

Ukraine’s Dayana Yastremska fell agonisingly short of a dream WTA title in Lyon, a week after escaping Russian bomb attacks on her home city of Odessa, but pledged to donate her prize money to support her besieged compatriots.

World number 140 Yastremska, who draped the Ukraine flag around her shoulders at every match , went down 3-6, 6-3, 6-4 to 64th-ranked Zhang Shuai of China in Sunday’s final.

"The prize money I earn here (14,500 euros for the runner-up), I’m going to give to the Ukrainian Foundation to support Ukraine," the tearful 21-year-old told the crowd. "I tried to fight for Ukraine."

MotoGP ‘give peace a chance’

MotoGP displayed the words "United for peace" during its television broadcasts at the opening race of the season in Qatar.

Several riders also wore a "Give peace a chance" sticker on their helmets.

In the feverish atmosphere of the Manchester derby at the Etihad, Premier League leaders City, who have three Ukrainian players in their squad, sported white T-shirts with the Ukrainian flag and the slogan "No War". The same message also appeared on the black T-shirts worn by United players during the minute of applause.

Before the kick-off of the Watford-Arsenal match, one end of Vicarage Road ground was transformed in the colours of the Ukrainian flag.

In Spain, Real Madrid displayed a Ukrainian flag with the message "All with Ukraine" at their Santiago-Bernabeu stadium before their match against Real Sociedad on Saturday. "Tonight, we want to show all our support for the Ukrainian people, a people who suffer the injustice of a war," said the stadium announcer.

Several clubs announced that they have made donations to charitable groups. Bayern Munich, for example, donated 100,000 euros to SOS-Children’s Village in Ukraine.

In the NHL, the Seattle Kraken franchise invited Ukrainian singer Roman Vashchuk to perform his country’s anthem before the game against Nashville, receiving a long ovation.

Some Chelsea fans chanted Russian owner Roman Abramovich’s name during a minute’s applause for Ukraine before Saturday’s 4-0 win against Burnley.

"We do it for Ukraine and there is no second opinion about this situation. They have our thoughts and our support and we should stand together. It’s not the moment for other messages."

Russian gymnast Ivan Kuliak, who sported an insignia linked to the invasion of Ukraine on a medals podium, was blasted for his "shocking behaviour" by the sport’s ruling body.

Kuliak’s shirt had the letter ‘Z’ prominently placed as he stood next to Ukraine’s Kovtun Illia, the gold medallist at a Gymnastics World Cup event in Doha.

The ‘Z’ has been seen daubed on Russian tanks and vehicles in Ukraine and has come to symbolise support for the invasion.

Kuliak had won the bronze medal on Saturday.