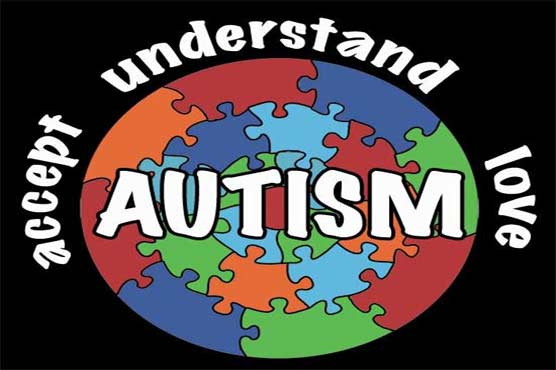 Approximately 3, 45,600 are affected with ASD in Pakistan.

ISLAMABAD – The eighth World Autism Day was observed today globally, but unfortunately in Pakistan autism is relatively a new phenomenon so far, and the awareness about this disease is still virtually nil. Autism is the third most common developmental disorder in the world.

The Autism day was designated by the United Nations General Assembly through a resolution passed on November 1, 2007, to highlight the need to improve the quality of life of those affected with autismso that they can lead full and meaningful lives as an integral part of the society.

Autism is a a neuro-developmental disorder, manifested in children during the first three years of life. Some of the most common symptoms of Autism spectrum disorder (ASD) in children are: 1) Delayed speech development. 2) Frequent use of set words and phrases. 3) Speech that sounds monotonous or flat. 4) Preferring to communicate using single words. 5) Not responding to their name being called. 6) Rejecting cuddles initiated by a parent or care giver. Reacting unusually negatively when asked to do something. 7) Being unusually intolerant of people entering their personal space, or not being aware of other people’s personal space. 8) Little interest in interacting with other people, including children of similar age. 9) Not enjoying situations that children of their age usually like. 10) Preferring to play alone, rather than asking others to play with them. 11) Rarely using facial expressions or gestures when communicating. 12) Avoiding eye contact. 13) Having repetitive movements, like flapping hands, rocking back and forth or flicking fingers. 14.) Playing with toys in repetitive and unimaginative ways. 15) Preferring to have a familiar routine and getting very upset if there are changes to this routine. 16) Having strong likes and dislikes of certain foods. 17) Unusual sensory interests – children with ASD may, for example, sniff toys, people or objects inappropriately.

There are over 60 million people with autism across the world — of which many Third World countries in Africa and Asia, including Pakistan, do not even have access to any public services. The Center for Disease Control and Prevention estimates show that the the number of persons being diagnosed with the autism spectrum disorders (ASD) throughout the world are one in 68 children, while a US police training documentary quotes the figure of one in 50. Recently, CNN reported that one out of 38 children could be on the spectrum in South Korea.

The situation is definitely alarming in a country like Pakistan, where due to lack of financial resources, reasonable education remains a dream even for an average person, affording rehabilitation services to an autistic child is well nigh impossible.

According to Pakistan Country Report on Autism, the population of Pakistan is estimated to be 172,800,048 hence the number of people on the spectrum is estimated to be a minimum 3, 45,600 although due to under-reporting, misdiagnosis and social stigma we can say this number is in reality much higher.

However, many of the nongovernmental organizations and private institutions help people not only to get such services at a very low cost, but also to help the needy ones by providing uniforms, lunch, paying their fee, etc. One of these NGOs working for this purpose is Autism Resource Center (ARC) which provides a number of facilities for the very young children suffering with autism.

The biggest challenge is the stigma attached with the word autism. Acceptance of this problem lacks in society as well as in the members of the affected families. Apart from this stigma, lack of treatment facilities, training facilities and poor attention from the government are some of the major problems that a family with autism has to face.

Unfortunately, in Pakistan, autism is not recognized either as a specific disorder or an atypical neurological trajectory, and autistic individuals are categorized as ‘mentally retarded’ as per the last census of 1998, she said.

In her report published on the ‘Autism Awareness’ she criticized the government s failure for not adding the developmental disorders in the Mental Health Ordinance 2001, neither in the National Trust for the Disabled.

On the other hand, the Indian National Trust Act 1999 specifically mentions “Welfare of Persons with Autism, Cerebral Palsy, Mental Retardation and Multiple Disabilities”. India is further increasing the number of recognized disabilities from seven to 19, while in Pakistan, there are only four categories in the Disability Acts of 1981, 2012 (Punjab) and 2014 (Sindh) — visual and hearing impairments, physical disabilities and mental retardation.

Quadrilateral Talks in Limbo – Taliban Say No Idea About Talks

Religion, Culture and Tradition: No Excuse for Violence