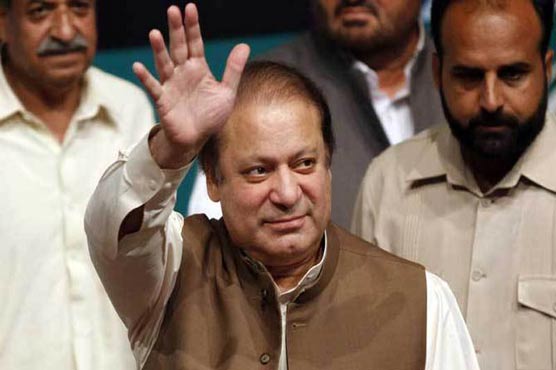 PM Nawaz Sharif appreciates the progress made by Rangers.

ISLAMABAD: Prime Minister Nawaz Sharif has praised the performance of Pakistan Rangers and the law enforcing agencies for their efforts to bring peace and stability in Sindh through the Karachi operation. The Prime Minister added that the federal government has joined hands with the provincial government of Sindh in order to eliminate all forms of extremism in the province.

“We have controlled the law and order situation and the time will soon come when we would not need to discuss law and order, but our agenda will be the development of this city,” the PM said.

While laying the foundation for the Rs.16 billion Green Line Bus Rapid Transit (BRT), Mr. Nawaz Sharif said that the coming decades hold firm significance for Pakistan’s economic and international stature as it will become a major stake holder in the South Asian region.

“In the next eight to ten years, Pakistan will have significant importance not only in South Asia, but in the entire Asian region,” the Prime Minister stated.
The Prime minister insisted that the law and order situation in Karachi has improved greatly and the remaining elements of street crime must be dealt with immediately.
“After controlling 70 per cent of target killings, extortion and kidnappings for ransom, please get rid of street crime,” the PM requested.

Moreover, the Rangers lead operation in Karachi to fight terrorism is being extended to the interior of Sindh in order to eliminate further networks of extremists in the province. The terrorists’ cells are reported to be working in the interior Sindh bordering Balochistan. The extension of the Karachi operation was finalized during a meeting held between Corps Commander Karachi Lt General Naveed Mukhtar and the Chief Minister Sindh Syed Qaim Ali Shah at the CM House. The implementation of the National Action Plan (NAP) was also discussed during the meeting.

A possible operation lead by the Rangers was due to operate in Punjab but the ruling party did not accept the recommendation put up by the army leadership in a high-level meeting which was chaired by Prime Minister Nawaz Sharif.

The military establishment believes that the Punjab police do not have the required equipment or the training to fight terrorists. Therefore, the army leadership recommended that the Rangers should be given the responsibility in Punjab to track and eliminate terrorist networks.

According to experts, the Punjab government would emphasize the utilization of its own Elite Force instead of calling the Rangers for an operation in Punjab as it would create a negative image of the provincial government and its forces. However, it is said that if the Rangers do operate in Punjab, they would have the same powers as they had during the Karachi operation.

Furthermore, The Leader of the Opposition in the National Assembly Syed Khurshid Shah has expressed dissatisfaction over the implementation of the National Action Plan (NAP). While talking to the reporters, Syed Khurshid Shah said that the federal government has made no progress in the implementation of NAP which is causing a new wave of terrorist attacks in the country.

Moreover, he claimed that only 60 cases have been sent to the military courts under NAP out of the 30,000 major cases and that puts a question mark on the level of progress the federal government has made thus far.
“What progress can we expect on the NAP if terrorism cases are sent to military courts at this pace? We do not know what happened in the Army Public School and Charsadda University. I ask the Khyber Pakhtunkhwa government to conduct a judicial investigation into the two tragedies,” the Pakistan People’s Party (PPP) leader said.

In 2013, Pakistan Muslim League-N under Nawaz Sharif took power. Among the priorities was the project to cleanse Karachi from terrorism. The first step to ensure this was to create a National plan to counter terrorism which was later passed as a bill from the National Assembly of Pakistan in 2013. Prime Minister Nawaz Sharif initiated the operation in 2013 under the Pakistan Rangers and gave them complete autonomy to strike and eliminate any potential threats.

During the first phase of the operation, around 9000 criminals were arrested during 677 raids. The federal government has faced strong opposition from the ruling party (PPP) and MQM. This resistance was due to the multiple raids that were conducted at nine zero, the political centre of MQM, and the arrest of numerous people belonging to the PPP.

Currently, the operation is in its second phase which is said to be ‘stronger’ and more aggressive. The Prime Minister of Pakistan remains firm on the completion of the Karachi Operation at ‘all costs’.