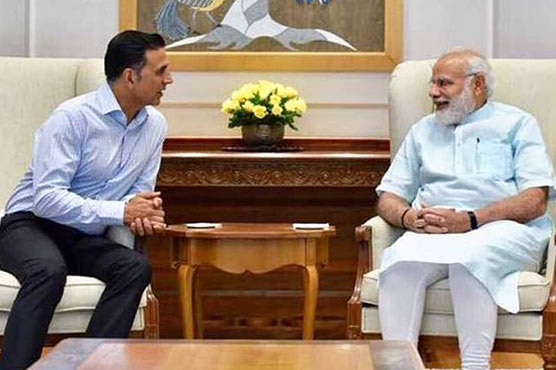 (Web Desk) – The Indian actor Akshay Kumar could play the role of Indian Prime Minister Narendra Modi in his upcoming biopic as he has been approached for casting.

Indian reports claim the Bollywood heartthrob could get the lead role in Narendra Modi biopic as he is believed to play the role with whole-hearted conviction and depicts his right image. The actor is currently promoting his upcoming movie “Toilet: Ek Prem Katha” and may bag the big role of India’s Hindu nationalist leader.

“Akshay Kumar’s presence will have impact in a story on Modi and (his selection) would be far-reaching as well as productive,” reports quoted a source. It was also told Paresh Rawal and Anupam Kher were also considered for the role. Anupam Kher has also played the role of former Indian PM Manmohan Singh in The Accidental Prime Minister, which will release in 2018.

Actor-turned politician Shatrughan Sinha called Akshay as the Mr. Clean of India and he suits the new image of prospering India. Indian Central Board of Film Certification (CBFC) Chairperson Pahlaj Nihalani converged to the idea that Akshay Kumar should play the role of Narendra Modi in his biopic.

He said the actor had a spotless image and he can be seen on the screen as an idealist and visionary like Indian PM himself. He opined the 49-year-old actor had also lifted himself from the working middle class to become a celebrity. “We are certainly looking at a strong possibility of Akshay playing Modiji,” he said.

Akshay Kumar has proved himself as a versatile actor by working in different projects like Jolly LLB 2, Baby, Special 26, Holiday and others. He maintains good relations with political and social groups in India.