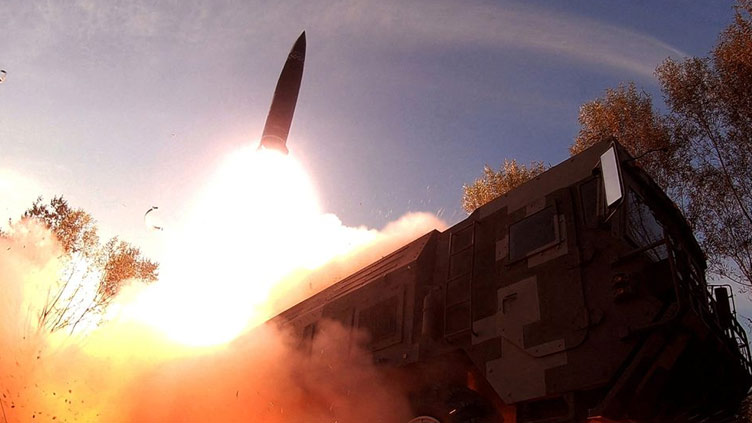 There is no universal definition of such weapons.

(Reuters) - From the war in Ukraine to North Korea’s recent missile testing spree, tactical nuclear weapons are being debated and developed in a way not seen since the Cold War.

There is no universal definition of such weapons, and analysts note that the use of any type of nuclear device would break the "nuclear taboo" in place since the United States dropped atomic bombs on Japan in 1945, the only time they have been deployed in war.

Here are the characteristics of tactical nuclear weapons and why they have drawn so much attention.

WHAT IS A TACTICAL NUCLEAR WEAPON?

Tactical nuclear weapons are often characterized by their size, their range, or their use for limited military targets.

They are often referred to as "non-strategic weapons", in contrast with strategic weapons, which the U.S. military defines as designed to target "the enemy’s warmaking capacity and will to make war," including manufacturing, infrastructure, transportation and communication systems, and other targets.

Tactical weapons, by contrast, are designed to accomplish more limited and immediate military goals that win a battle.

The term is often used to describe weapons with a lower "yield", or the amount of power released during an explosion.

They are typically many times larger than conventional bombs, cause radioactive fallout and other deadly effects beyond the explosion itself, and there is no agreed upon size that defines tactical weapons.

Tactical weapons are often mounted on as missiles, air-dropped bombs, or even artillery shells that have a relatively short range, far less than the huge intercontinental ballistic missiles (ICBMs) designed to travel thousands of kilometres and strike targets across oceans.

However, many of these delivery systems can also deliver strategic nuclear weapons.

Many of the world’s nuclear powers have weapons that are considered low-yield or meant to be used on the battlefield.

According to a March report by the U.S, Congressional Research Service (CRS), the United States has approximately 230 non-strategic nuclear weapons, including about 100 B61 bombs deployed with aircraft in Europe.

In 2018 the Trump administration announced plans for a new low-yield warhead for submarine-launched ballistic missiles (SLBMs), and a new non-strategic nuclear-tipped cruise missile.

Russia has 1,000 to 2,000 warheads for non-strategic nuclear weapons in its arsenal, the CRS report says.

North Korea said this week that its recent flurry of missile tests were designed to simulate showering the South with tactical nuclear weapons.

Experts believe that if North Korea resumes nuclear testing, it could include development of smaller warheads meant for battlefield use.

WILL THEY BE USED?

President Vladimir Putin, who rules the world’s biggest nuclear power, has repeatedly cautioned the West that any attack on Russia could provoke a nuclear response.

U.S. President Joe Biden said on Wednesday he doubted that Putin would use a nuclear weapon, and analysts have said tactical weapons could have limited military use in the vast and dispersed battlefields in Ukraine.

Earlier Biden noted that the use of even small nuclear weapons could spiral out of control.

"I don’t think there’s any such thing as the ability to easily (use) a tactical nuclear weapon and not end up with Armageddon," he said last week.

North Korea’s pursuit of the weapons, meanwhile, could represent a dangerous change in the way North Korea deploys and plans to use nuclear weapons, analysts say.

It has also prompted renewed debate in South Korea over redeploying American tactical nuclear weapons, which were withdrawn from the peninsula in the 1990s, or pursuing its own nuclear programme.

North Korea says its nuclear weapons are for self-defence.