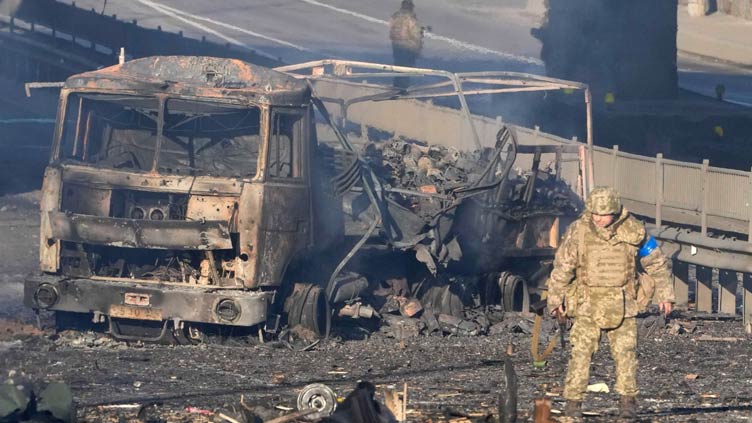 A defiant Ukrainian President Volodymyr Zelensky vowed his pro-Western country would never give in to the Kremlin even as Russia said it had fired cruise missiles at military targets.

With explosions echoing around Kyiv on the third day of Russia s assault, Zelensky spoke in a video message, wearing olive green military-style clothing and looking tired but determined.

"I am here. We will not lay down any weapons. We will defend our state, because our weapons are our truth," the 44-year-old said.

"Our truth is that this is our land, our country, our children and we will protect all of this."

Tens of thousands more are estimated to be displaced within Ukraine, with many on the move to less affected western areas of the country.

Ukrainian Health Minister Viktor Lyashko said 198 civilians, including three children, had been killed in the conflict and 1,115 wounded.

In Kyiv, residents took shelter in the subway system and in cellars and basements.

"We thought something like this might happen, but we were hoping until the end that it wouldn t," Irina Butyak told AFP in one shelter.

"We were hoping that common sense and common decency would prevail. Well, it didn t," the 38-year-old teacher said.

Tens of thousands of refugees streamed into nearby Poland.

"We don t want to be running from country to country and asking for support, but support is really needed this time," one refugee, who only gave her first name, Anna, told AFP at the train station in the Polish border city of Przemysl.

In Paris, French President Emmanuel Macron warned that the world must brace for a long war.

"This crisis will last, this war will last and all the crises that come with it will have lasting consequences," Macron said.

"We must be prepared".

After speaking to Macron, Zelensky tweeted to thank "partners" for sending weapons and equipment.

Several NATO members have sent weapons and ammunition to Ukraine in recent weeks, including Britain, the United States and ex-communist countries in eastern Europe.

NATO has said it is deploying its rapid response force of 40,000 troops to eastern Europe for the first time, but the Western military alliance has made clear it will not send any troops to Ukraine.

Russia meanwhile accused Ukraine of prolonging the conflict by refusing to take up its offer of negotiations in neighbouring Belarus, where Russia has stationed thousands of troops.

Zelensky said his country had "derailed" the Russian plan of overthrowing him and urged Russians to pressure Putin into stopping the conflict.

In the early hours of Saturday, AFP reporters in Kyiv heard occasional blasts of what soldiers said were artillery and Grad missiles being fired in an area northwest of the city centre.

There were also loud explosions in the centre.

Emergency services said a high-rise apartment block was hit by shelling overnight, posting a picture that showed a hole covering at least five floors blasted into the side of the building.

Kyiv s mayor, Vitali Klitschko, said the building had been hit by a missile.

"The enemy is trying to break into the city, in particular from Gostomel, Zhytomyr, where the aggressors are neutralised," Klitschko said, referring to two settlements to the northwest and west of the city.

"Now in Kyiv there are, unfortunately, sabotage groups, there were several clashes," he said.

Hours later, AFP saw a destroyed Ukrainian military truck in the city centre and a civilian volunteer digging a trench for soldiers.

Ukrainian army tanks were also seen manoeuvring all over the centre but the streets were mostly empty and the centre silent except for the sound of air raid sirens and birdsong.

The city said it was toughening a curfew in place and anyone on the streets after 5:00 pm would be considered "members of the enemy s sabotage and reconnaissance groups".

Elsewhere in Ukraine, AFP saw traces of an airstrike on a military base near the village of Rozsishki in central Ukraine, including two destroyed trucks.

At the entrance to several villages and towns on the way to Lviv, men in civilian clothes could be seen manning improvised concrete barriers.

When he announced the beginning of the assault Thursday, Putin said it was to defend Russia-backed separatists in eastern Ukraine.

The rebels have been fighting Ukrainian government forces for eight years in a conflict in which more than 14,000 people have been killed.

Putin called the current conflict a "special military operation" and Russia s communications regulator on Saturday told independent media to remove reports describing it as an "assault, invasion, or declaration of war".

In a statement, the regulator accused the media outlets of spreading "untrue information" about the shelling of Ukrainian cities by the Russian army and civilian deaths.

Russia has brushed off international condemnation and increasingly stringent sanctions adopted by the United States, Canada, Britain and the European Union, including against Putin himself and Foreign Minister Sergei Lavrov.

Moscow said sanctioning the pair was "a demonstration of the complete impotence of the foreign policy" of the West.

The impact of sanctions has been far-reaching.

French naval forces on Saturday said they had intercepted in the Channel a cargo vessel loaded with cars bound for Russia.

The Russian-flagged Baltic Leader ship is suspected of belonging to a sanctioned company.

Russia has also said it was closing its airspace to flights from Bulgaria, Poland and the Czech Republic in response to sanctions.

Zelensky has called on Western allies to go further by expelling Moscow from the SWIFT banking transfer system -- a move that would cripple Russia s trade with most of the world. But a number of EU countries, including Germany, Hungary and Italy, have been reluctant over fears Russia could cut off gas supplies.