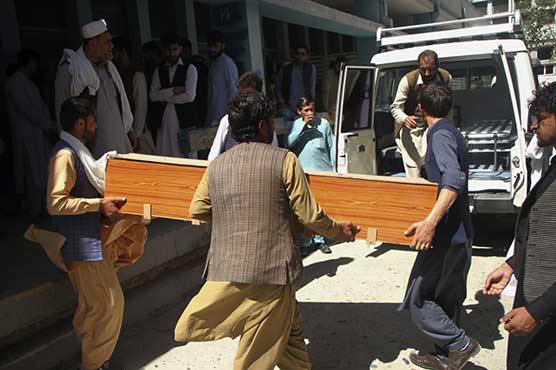 Officials have blamed the Taliban for much of the violence across Afghanistan.

The three women were killed in two separate attacks in the restive eastern city of Jalalabad, officials said. "They were all on duty going from house to house to vaccinate children," supervisor Wahidullah, who like many Afghans uses only one name, told AFP.

An official at the Nangarhar governor s office confirmed the incidents. A relative of one of the victims told AFP his niece had joined the immunisation programme to earn some money for her family. "Gunmen shot her dead this morning when she was on duty giving vaccines to children," said Haji Maqbool.

Farmer Saifullah, who witnessed the killing of the other two workers, said three gunmen had followed them before shooting them. "The girls had stopped in front of a house and were knocking the door. They were carrying a medical box and some papers," he said. "The gunmen then came closer and shot the girls before fleeing."

A spokesman for the ministry of health said the vaccination drive had been temporarily suspended in Nangarhar. The top US envoy to Kabul, Ross Wilson, condemned the killings. "Such attacks are a direct affront to Afghans  dream of building a better life for their children," he said on Twitter. "Attacking vaccinators is as heartless as it is inexplicable."

Polio has been eradicated across the world apart from Afghanistan and Pakistan, where distrust of vaccines is rife. Officials say the Taliban won t allow door-to-door campaigns in areas they control.

The Taliban and religious leaders often tell communities that vaccines are a Western conspiracy aimed at sterilising Muslim children, and they also suspect immunisation drives are used for spying on militant activities.

The attack on the three polio workers comes amid a surge in violence across Afghanistan and despite peace talks launched between the Taliban and government last year. A wave of assassinations against high profile Afghans including journalists, activists and civil servants has particularly triggered fear across the nation.

Officials have blamed the Taliban for much of the violence across Afghanistan. The insurgent group denies it is targeting civilians. The killing of polio workers comes after similar attacks on March 2 claimed by the jihadist Islamic State group left three female media workers dead in Jalalabad.

The Islamic State group has a presence in the eastern province.