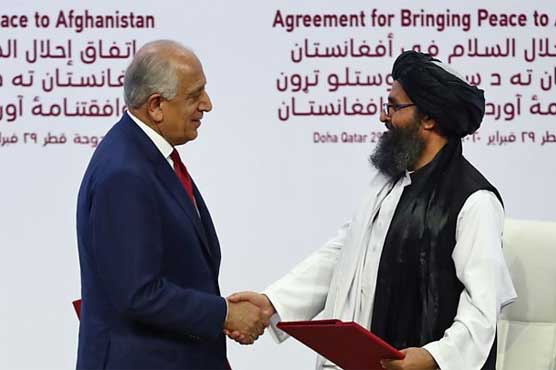 Iran said a so-called peace deal is an attempt by US to justify its illegal presence in Afghanistan.

TEHRAN (Dunya News) – Iran on Sunday rejected the agreement signed between the United States of America and the Taliban in Doha, noting that Washington had no legal status to allow this to determine the future of the country.

The reaction by Iran s Foreign Ministry Sunday came a day after US and Taliban representatives signed a pact aimed at gradually withdrawing foreign troops from Afghanistan.

Iran said a so-called peace deal between the Taliban and the United States is an attempt by Washington to justify its illegal presence in Afghanistan, stressing that only domestic talks can stabilize the war-torn country.

The statement said it "believes a lasting peace agreement in Afghanistan will only be achieved through inter-Afghan dialogue with the participation of the country s political groups, including the Taliban, and by taking into account the concerns of Afghanistan s neighbors."

"Tehran welcomes any development that contributes to peace and stability in Afghanistan and supports efforts being made in this regard under the Afghan leadership and sovereignty," it said in a statement.

The agreement was struck in the Qatari capital, but while it creates a path for the US to gradually pull out of its longest war, many say it will pose serious challenges as the Afghan government has so far been sidelined.

Iran said it "believes that the presence of foreign troops in Afghanistan is illegal and is one of the main reasons for the war and insecurity in that country."

"The United States has no legal standing to sign a peace deal or determine the future of Afghanistan," the Iranian Foreign Ministry statement said. "We believe that the United Nations has the appropriate capacity to facilitate inter-Afghan negotiations as well as to monitor and ensure the implementation of the agreements reached" among Afghanistan s warring sides, it added.

Tehran said while respecting the sovereignty and territorial integrity of Afghanistan, it is ready to provide any assistance in establishing peace, stability and security in Afghanistan in line with Iran s national security strategy.

"We hope that there will be a government established in Afghanistan that will have friendly and fraternal relations with its neighbors and be able to eradicate terrorism," the statement said.

On Saturday, The United States signed a landmark deal with the Taliban on Saturday, laying out a timetable for a full troop withdrawal from Afghanistan within 14 months as it seeks an exit from its longest-ever war.

The agreement is expected to lead to a dialogue between the Taliban and the Kabul government that, if successful, could ultimately see an end to the grinding 18-year conflict.

Taliban fighter-turned-dealmaker Mullah Baradar signed the accord alongside Washington’s chief negotiator Zalmay Khalilzad, at a gilded desk in a conference room in a luxury Doha hotel.

The pair then shook hands, as people in the room shouted "Allahu Akbar".

Agreement signed in Doha in the presence of leaders from Pakistan, India, Indonesia, Uzbekistan and Tajikistan, will pave the way for the United States to gradually withdraw its troops.

According to the accord, The United States and its allies will withdraw all their forces from Afghanistan within 14 months if the Taliban abide by an agreement due to be signed in Doha on Saturday, Washington and Kabul said in a joint statement.

After an initial reduction of troops to 8,600 within 135 days of Saturday s signing, the US and its partners "will complete the withdrawal of their remaining forces from Afghanistan within 14 months... and will withdraw all their forces from remaining bases", the declaration stated.

The peace deal also proposes an intra-Afghan dialogue with the government in Kabul and the release of thousands Taliban members from prison. The intra-Afghan talks are to begin on March 10.

Under the agreement, Taliban also agreed not to allow al-Qaeda or any other extremist group to operate in the areas they control.

US Secretary of State Mike Pompeo called on the Taliban Saturday to honour its commitments to sever ties with jihadist groups.

"Keep your promises to cut ties with Al-Qaeda. I know there will be a temptation to declare victory, but victory for Afghans will only be achieved when they can live in peace and prosper," he said at the ceremony in Doha.

US ‘will not hesitate to nullify’ agreement if Taliban break deal: Pentagon chief

The United States "will not hesitate to nullify" its historic deal with the Taliban if the insurgents renege on their security guarantees and commitment to hold talks with the Afghan government, US Defense Secretary Mark Esper said Saturday.

On a visit to Kabul, Esper warned that "should the Taliban fail to honour their commitments they will forfeit their chance to sit with fellow Afghans and deliberate on the future of their country."

"Moreover the United States would not hesitate to nullify the agreement," he added.

The European Union said that a landmark deal between the US and the Taliban, and a separate US-Afghanistan declaration, are "important first steps towards a comprehensive peace process" in Afghanistan.

The EU’s foreign policy chief Josep Borrell said in a statement that "the current opportunity to move towards peace should not be missed" and the bloc expected "Afghan-owned and Afghan-led negotiations to start without delay in an inclusive manner and aiming at a lasting peace”.

On the eve of the signing, President Donald Trump urged the Afghan people to embrace the chance for a new future, saying the deal held out the possibility of ending the 18-year conflict.

"If the Taliban and the government of Afghanistan live up to these commitments, we will have a powerful path forward to end the war in Afghanistan and bring our troops home," he said on the eve of the event in Doha.

But the position of the Afghan government, which has been excluded from direct US-Taliban talks, remains unclear and the country is gripped by a fresh political crisis amid contested election results.

The Doha accord was drafted over a tempestuous year of dialogue marked by the abrupt cancellation of the effort by Trump in September.

The signing comes after a week-long, partial truce that has mostly held across Afghanistan, aimed at building confidence between the warring parties and showing the Taliban can control their forces.

Since the US-led invasion that ousted the Taliban after the September 11, 2001 attacks, America has spent more than $1 trillion in fighting and rebuilding in Afghanistan.

About 2,400 US soldiers have been killed, along with unknown tens of thousands of Afghan troops, Taliban fighters and Afghan civilians.

The insurgents said they had halted all hostilities Saturday in honour of the agreement.

"Since the deal is being signed today, and our people are happy and celebrating it, we have halted all our military operations across the country," Taliban spokesman Zabihullah Mujahid told AFP.

Any insurgent pledge to guarantee Afghanistan is never again used by jihadist movements such as Al-Qaeda and the Islamic State group to plot attacks abroad will be key to the deal’s viability.

The Taliban’s sheltering of Al-Qaeda was the main reason for the US invasion following the 9/11 attacks.

The group, which had risen to power in the 1990s in the chaos of civil war, suffered a swift defeat at the hands of the US and its allies. They retreated before re-emerging to lead a deadly insurgency against the new government in Kabul.

After the NATO combat mission ended in December 2014, the bulk of Western forces withdrew from the country, leaving it in an increasingly precarious position.

While Afghans are eager to see an end to the violence, experts say any prospective peace will depend on the outcome of talks between the Taliban and the Kabul government.

But with President Ashraf Ghani and rival Abdullah Abdullah at loggerheads over contested election results, few expect the pair to present a united front, unlike the Taliban, who would then be in a position to take the upper hand in negotiations.