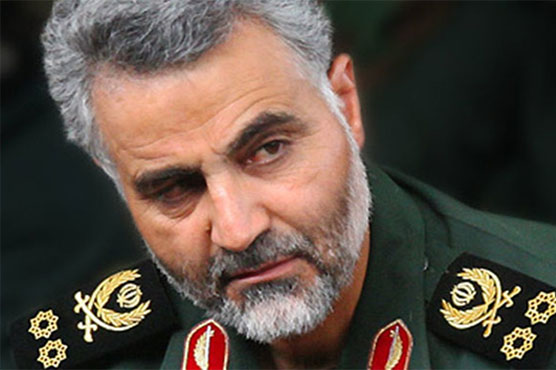 Qasem's assassination was praised by Trump but elsewhere there were warnings of the danger.

PARIS (AFP) - The world reacted with alarm on Friday after top Iranian commander Qasem Soleimani was killed in a US strike in Baghdad, with many governments appealing for restraint.

The attack was praised by US President Donald Trump’s Republicans and close ally Israel, but elsewhere there were sharp warnings it could inflame regional tensions.

Following are some of the reactions from around the world:

"This action can seriously aggravate the situation in the region," Russian President Vladimir Putin said, according to a Kremlin readout of a phone conversation with French counterpart Emmanuel Macron.

Konstantin Kosachev, head of the foreign affairs committee of parliament’s upper house, said on Facebook the killing was a mistake that would strike back at Washington.

"We urge the relevant sides, especially the United States, to remain calm and exercise restraint to avoid further escalating tensions."

He said Iraq’s sovereignty, independence and territorial integrity must be respected.

"Just as Israel has the right of self-defence, the United States has exactly the same right."

"Meting out the appropriate punishment to these criminal assassins... will be the responsibility and task of all resistance fighters worldwide," the leader of Lebanon’s Hezbollah Shiite militant group, Hassan Nasrallah, said in a statement.

"We will carry a flag on all battlefields and all fronts and we will step up the victories of the axis of resistance with the blessing of his pure blood."

"The assassination of an Iraqi military commander in an official post is an aggression against the country of Iraq, its state, its government and its people," he said.

It was a "flagrant violation of the conditions authorising the presence of US troops" on Iraqi soil.

"In a display of resolve and strength, we struck the leader of those attacking our sovereign US territories," top House of Representatives Republican Kevin McCarthy said.

"Wow - the price of killing and injuring Americans has just gone up drastically," tweeted Senator Lindsey Graham, a close confidant of Trump.

But among Democrats, US House Speaker Nancy Pelosi said the killing risks provoking a "dangerous escalation of violence".

"Iran will surely respond. We could be on the brink of a major conflict across the Middle East."

"Pakistan has viewed with deep concern the recent developments in the Middle East, which seriously threaten peace and stability in the region," the foreign ministry said.

"Respect for sovereignty and territorial integrity are the fundamental principles of the UN Charter, which should be adhered to. It is also important to avoid unilateral actions and use of force."

The foreign ministry in neighbouring India said: "We have noted that a senior Iranian leader has been killed by the US. The increase in tension has alarmed the world."

"It is manifest that the operation carried out by the US will increase insecurity and instability in the region... Turkey has always been against any foreign intervention in the region, assassinations and sectarian conflicts," the foreign ministry said.

"In such operations, when we can see an escalation is under way, what we want above all is stability and de-escalation.

"Our role is not to take sides, but to talk with everyone."

British Foreign Secretary Dominic Raab said London had "always recognised the aggressive threat" posed by Soleimani and his Quds Force. "Following his death, we urge all parties to de-escalate. Further conflict is none of our interests."

The Netherlands: ‘Nobody benefits from further escalation’

"It is of great importance that tranquility is preserved in the region. Nobody benefits from further escalation," tweeted Dutch Foreign Minister Stef Blok whose country has taken part in the anti-IS coalition since 2014.

Syria is "certain that this cowardly US aggression... will only strengthen determination to follow in the path of the resistance’s martyred leaders," a foreign ministry official said, according to state news agency SANA.

The official said the killings were "a serious escalation" and accused the US of resorting to "the methods of criminal gangs".