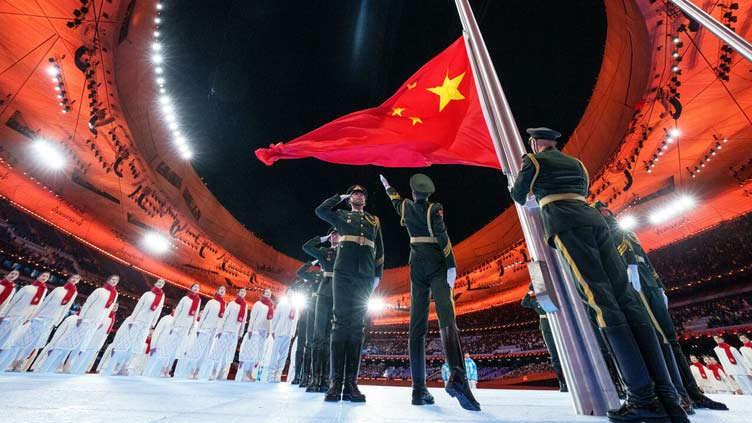 BEIJING (AFP) - China have emerged as a new Winter Paralympics powerhouse at their own Beijing Games, topping the medals table in a stunning success backed by huge investment and aided by the absence of Russian athletes.

The hosts on Sunday stood proudly top of the standings having won 60 medals and 18 golds with just a handful of events still to be decided.

Their rise is all the more remarkable given that only they made their Winter Paralympics debut in 2002 and it took them until Pyeongchang, just four years ago, to win a first gold, in wheelchair curling.

"The Games have given people with impairments a lot of confidence," gold medal cross-country skier Mao Zhongwu told AFP.

Capelli said had to go back to basics to turn a squad of beginners into champions.

"For these athletes, every day for 11 months, it was: ski training, ski training ... I don’t know which other country can do this," he said.

"On the first day, we did a test with them, on a slope where they had to make five turns. We realised that they were all beginners."

China’s General Administration of Sports had a budget of $1 billion in 2021 and a significant amount was channelled into winter sports, according to the Center for Strategic and International Studies.

The think-tank noted that strong Summer Games performer Australia had a sports budget of $124 million, while American athletes were entirely privately funded.

"The Chinese mentality is: when they want something, they want the top. They invest a lot of money. That is very important," Capelli said.

"Their strong showing may be the result of aligning a vision and mission across the entire Paralympic squad, including support staff, which helps to mobilise efforts and create an overarching vision driving their team forward," she told AFP.

Small crowds of hand-picked domestic spectators have been going wild for Chinese victories -- dancing to pop music and waving flags.

At the para-snowboarding cross finals, China made a clean sweep of the men’s upper limb category medals.

The ecstatic trio, Ji Lijia, Wang Pengyao and Zhu Yonggang wore their country’s flag like capes as they celebrated the result.

It can spur some athletes to greater heights while for others it increases stress.

"In Chinese society, I assume competing at home would be advantageous because of the pride the Chinese have in representing their country in front of their relatives, friends, and villages; their social identity is very strong," he told AFP.

"But everyone will be different. I assume that some will feel that pressure and subsequently underperform."

The absence of the powerful Russian athletes -- who were banned from the games following Moscow’s invasion of Ukraine -- also cleared a path for more Chinese success.

The International Paralympics Committee (IPC) originally ruled that athletes from Russia and ally Belarus would be allowed to compete as neutrals, but 24 hours later banned the two countries after threats of boycotts and tension in the athletes’ village.

IPC President Andrew Parsons acknowledged the impact of the Russian absence. "Of course some of them are very strong athletes and this has in some way affected the depth of field in some events," Parsons said.

The scale of China’s success in Beijing even took some of their own athletes by surprise.

"We weren’t really aware of our level before these Paralympic Games," said Liu Sitong, 27, who won two bronze and one silver medal in women’s sitting alpine skiing, "because we haven’t been competing abroad much lately."