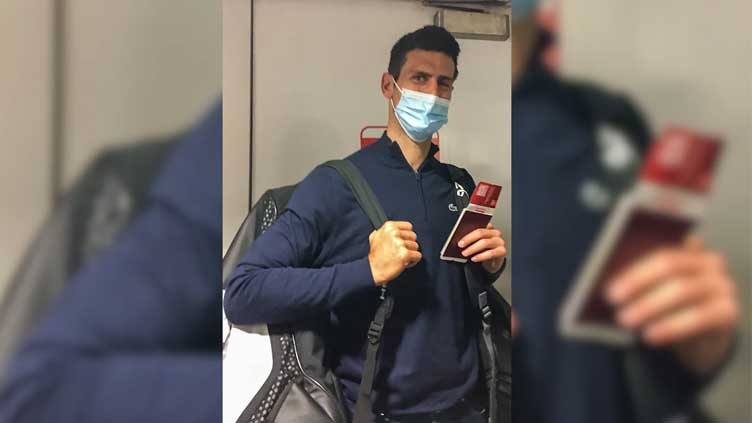 DUBAI, (AFP) - Tennis world number one Novak Djokovic landed in Dubai on Monday after his sensational deportation from Australia over his coronavirus vaccination status put his bid for a record 21st Grand Slam title on hold.

As the Australian Open got under way in Melbourne, the men’s defending champion stepped off an Emirates plane carrying two bags and wearing a mask, his final destination unknown.

It follows a protracted and high-stakes legal battle between the unvaccinated Djokovic and the Australian authorities that polarised opinion and damaged reputations on both sides.

Djokovic said he was "extremely disappointed" after a Federal Court unanimously upheld the cancellation of his visa on public order grounds.

The humbled star boarded a flight from Melbourne’s Tullamarine airport for Dubai late Sunday, accompanied by a retinue of aides and officials.

Emirates flight EK409 took off at 10:51 pm local time (1151 GMT), according to an AFP reporter on board, and landed before dawn in Dubai.

Twice in the last 11 days Australia’s government had ripped up Djokovic’s visa and placed him in immigration detention -- saying the unvaccinated star’s presence could fuel anti-vaccine sentiment amid a tidal wave of Omicron cases.

Twice the Serbian star fought the decision in court, winning one round but losing Sunday’s decider.

With a few dry words, the chief justice of Australia’s Federal Court, James Allsop, ended a week of legal high drama that was followed around the world.

"The orders of the court are that the amended application be dismissed with costs," Allsop said.

With little chance for appeal, Djokovic acknowledged the game was up, and he would not be gracing Melbourne Park this year.

"I cannot stay in Australia and participate in the Australian Open," he said, on the eve of a tournament that he has dominated for a decade, winning a record nine titles.

"I hope that we can all now focus on the game and tournament I love."

But the controversy looks set to rumble on, with Djokovic’s image seriously tarnished and Australia feeding a growing reputation for being hostile to visitors.

"This cancellation decision was made on health, safety and good order grounds, on the basis that it was in the public interest to do so," conservative Prime Minister Scott Morrison said hailing the court verdict.

"I welcome the decision to keep our borders strong and keep Australians safe."

‘Loss for the game’

Morrison, who faces a tough reelection battle this year, is unlikely to suffer a public backlash over the saga, even among those with misgivings about his hardline immigration policies.

Many Australians -- who have suffered prolonged lockdowns and border restrictions -- believe Djokovic gamed the system to dodge vaccine entry requirements.

It remains to be seen if the controversy, which the ATP Tour called "deeply regrettable", has a bearing on Australia’s claim to host what was once known as "The Happy Slam" and which starts on Monday.

"Irrespective of how this point has been reached, Novak is one of our sport’s greatest champions and his absence from the Australian Open is a loss for the game," it added.

Serbian President Aleksandar Vucic was withering in his criticism of Australian authorities.

"They think that they have by this, this mistreatment of 10 days, humiliated Djokovic, but they have humiliated themselves. Djokovic can return to his country with his head held high," Vucic told a state media outlet.

Djokovic could now be banned from visiting Australia for three years, making it much more difficult for the 34-year-old to secure that elusive 21st Grand Slam.

He is tied with Roger Federer and Rafael Nadal with 20 Grand Slam titles each.

‘With or without him’

More immediately he is likely to be trailed by questions about his conduct that the court hearings unearthed.

It emerged the tennis ace contracted Covid-19 in mid-December and, according to his own account, failed to isolate despite knowing he was positive.

Public records show he attended a stamp unveiling and a youth tennis event, and granted a media interview around the time he got tested and his latest infection was confirmed.

Djokovic declined to give evidence in the case to dispel the notion that he is opposed to vaccines.

"He has now become an icon for the anti-vaccination groups," government lawyer Stephen Lloyd said. "Rightly or wrongly he is perceived to endorse an anti-vaccination view and his presence here is seen to contribute to that."

"He could set the record straight if it needed correcting. He has not -- that has important consequences."

Spanish great Nadal took a swipe at his rival on Saturday as players complained the scandal was overshadowing the opening Grand Slam of the year.

"The Australian Open is much more important than any player," Nadal told reporters at Melbourne Park.

However, Djokovic’s compatriot Miomir Kecmanovic, who was set to face the nine-time champion in the first round on Monday, called the incident a "bitter pill to swallow".

"Our little Serbian team here in Melbourne is upset and disappointed," Kecmanovic wrote on Instagram.