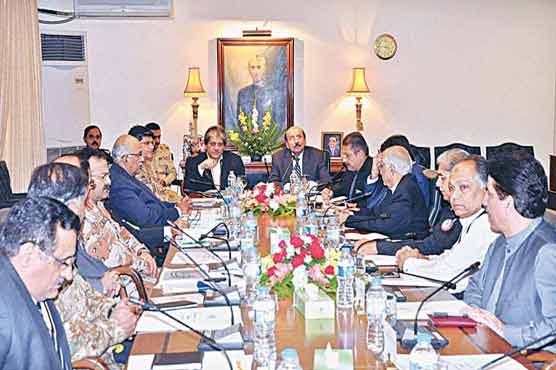 ISLAMABAD: The chief of the paramilitary forces has revealed that Sindh Rangers have substantial information on extremists who have been working under the instructions of India’s Research and Analysis Wing (RAW) to cause terror and havoc across the province.

During a formal briefing, Major Gen Bilal Akbar, Director General Rangers, stated that multiple criminals have been arrested in Karachi who were extensively trained in India and were aimed at causing unrest in Pakistan through terror plots. The meeting was chaired by the Chief Minister of Sindh, Qaim Ali Shah.

Qaim Ali Shah instructed the concerned security agencies to eliminate anti-state elements from the province immediately. The Chief Minister insisted that after the arrest of RAW agent Kulbhushan Yadav from Balochistan, the operation against separatists in the province is a top priority for Sindh.

“Pakistan is passing through a very sensitive phase after the arrest of the RAW agent in Balochistan, and his disclosure that more agents were operating in Karachi. Necessary measures must be taken against them,” Shah said.

Previously, the RAW agent from India, Kulbhushan Yadav, had revealed that his main task was to destabilize the China- Pakistan Economic Corridor (CPEC) by cultivating anti-state elements among the Baloch nationalists, reports said.

During preliminary investigations, the RAW agent revealed that he had contacted multiple Baloch leaders and insurgents across Balochistan in order to conspire against the state through a separatist propaganda. The Indian Navy Commander also claimed that he had disbursed millions of rupees to insurgents and extremists across the province to elevate the cause against CPEC.

Moreover, Chief of Army Staff General Raheel Sharif had already made it clear that the security forces of Pakistan will make certain that every project under CPEC is implemented successfully at ‘all costs’. A Special Security Division (SSD) was created to monitor and provide security to every project that resided under CPEC. During a recent visit to the headquarters of SSD, General Sharif instructed the task force to ensure the successful implementation of every project under the economic corridor.

The army chief stated that he was aware of every campaign that is working against the success of the CPEC project and ensured that the military will resist any negativity that harms its implementation.
“We are aware of all the campaigns against CPEC,” said the army chief.

Furthermore, representatives from Baluchistan National Party Mengal (BNP-M), National Party, Jamhoori Watan Party, Jamaat-i-Islami and Pakhtunkhwa Milli Awami Party (PkMAP) have collectively agreed upon the continuation of CPEC and called out for ‘unity’ among the provinces through progressive coordination with the federal government.

Under CPEC, China is said to reduce its route cost by thousands of kilometers for its oil and gas imports from Africa and the Middle East.

The federal government has assured that Prime Minister Nawaz Sharif will raise the issue of Indian intelligence agencies conspiring against Pakistan’s stability with his Indian counterpart, Narendra Modi and the President of United States, Barack Obama, in the coming days.