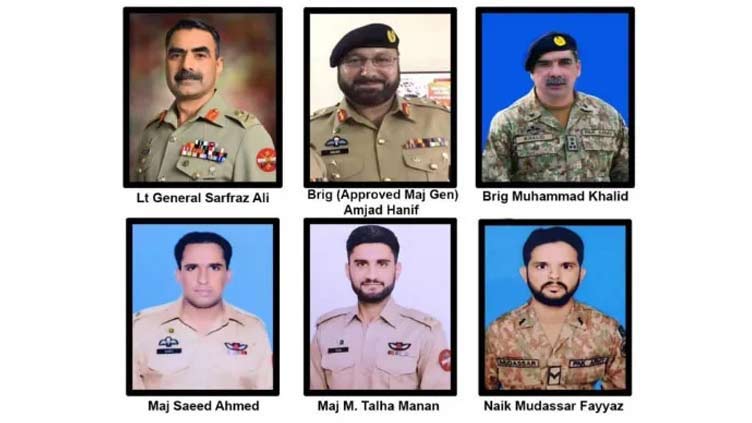 ISLAMABAD (Dunya News) – The workers of a political party have been found involved in the negative campaign after Lasbela chopper crash which led to the martyrdom of six Pakistan Army officials including Corps Commander Quetta Lt Gen Sarfraz Ahmed.

It is pertinent to mention here that the campaign began at a time when the whole nation was saddened by the martyrdom of the highest officers of the Pakistan Army.

Earlier, the joint inquiry committee comprising of officials from the Federal Investigation Agency (FIA), Inter-Services Intelligence (ISI), and the Intelligence Bureau (IB) had submitted an initial report to Interior Ministry on the campaign to malign the Pakistan Army.

The team had detected a total of 754 tweets and also found out that over 17 accounts were operating from India whereas 204 accounts were being handled by people inside Pakistan.

Six people have been identified while around 84 people who were shortlisted during the course of the investigations were being thoroughly probed.

Meanwhile, data of 78 persons have been sent to National Database and Registration Authority (NADRA) for verification.

The helicopter that had gone missing as it was enroute from Quetta to Karachi. The personnel in the chopper were overseeing the flood relief efforts in the southwest of the country.

“The regretful social media campaign after the unfortunate helicopter crash on August 1 has caused deep anguish and distress among Shuhada families and rank and file of the Armed Forces,” said the military’s media wing.

The statement further added: “While the whole nation stood with the institution in this difficult time certain insensitive quarters resorted to hurtful and derogatory comments on social media which is unacceptable and highly condemnable.” Separately, Inter-Services Public Relations (ISPR) Spokesperson Major General Babar Iftikhar on Friday ruled out any chance that Pakistan’s soil has been used in the killing of Al-Qaeda leader Ayman al-Zawahiri in Afghanistan.

A military helicopter was crashed in the Balochistan province which led to the martyrdom of six army officials including a top army commander. Besides Lieutenant General Safraz Ali — Commander of XII Corps, the Director-General of Coast Guards Brigadier Amjad was also martyred in the crash.

The other four military personnel martyred in the accident include Major Syed the pilot, Major Talha the co-pilot, Brigadier Khalid and Chief Naik Mudassir.

Gen. Sarfraz Ali was supervising flood relief operations in Balochistan province. The wreckage of the helicopter was found in Musa Goth, Lasbela of Balochistan. Major General Babar Iftikhar, head of the media wing of Pakistan s armed forces, said the accident occurred due to bad weather as per initial investigations.

The Pakistan Army Aviation helicopter was on flood relief operations in Lasbela, Balochistan when it lost contact with ATC.