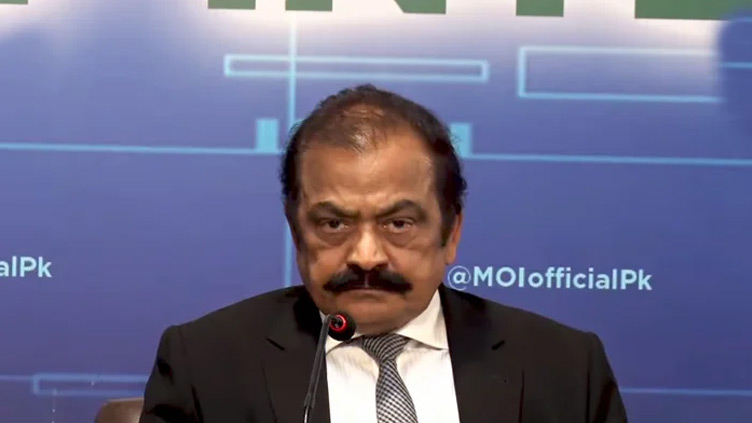 ISLAMABAD (Dunya News) - Minister for Interior Rana Sanaullah on Wednesday expressed resolve to arrest perpetrators of Karachi blast and set a precedent. He said that on the directives of Prime Minister Shehbaz Sharif, he was going to Karachi today.

He said the entire country expressed solidarity with Chinese brothers and it was our common grief. We will deal with it with full force as it is attack on Pak-China friendship, he added. He said that he would find out the facts in meeting with the concerned authorities. Our great friend China will be kept fully informed in progress about investigation into the incident, he added.

The minister said they would review all security apparatus for Chinese residents and would take effective measures after a thorough review of security. Every aspect will be carefully examined, he added. Sana Ullah said the federal government would cooperate fully to bring the perpetrators to justice.

Meanwhile, a high-level team has been formed to investigate the suicide bombing in Karachi.

Four people including three Chinese nationals were killed in the blast in University of Karachi Tuesday afternoon.

According to the notification, the DIGP of the Crime Investigation Agency (CIA) was appointed as the Chairman of the four-member investigation committee while SSP Malir Irfan Bahadur, SSP East Abdul Rahim Sheerazi and SSP AVCC Zubair Naseer will be members of the team.

The four-member team has been directed to ensure that concrete efforts are made to help the CTD team and report progress on regular basis.

Earlier, the Counter Terrorism Department (CTD) in-charge Umar Khattab has confirmed the blast at Karachi University was a suicide bomb attack. He also mentioned that a banned organization has claimed responsibility for the blast. The suicide bomber had explosives inside a bag, as per CTD in-charge.

DIG East Muqaddas Haider stated that more than three kilograms of explosives were used in the blast, adding that traces of explosives including ball bearings could be spotted on the vehicle.

The mentioned vehicle used to visit the university campus at the same time on daily basis, added DIG.

The deceased Chinese nationals have been identified as the director of the Confucius Institute Huang Guiping, Ding Mupeng, Chen Sai, and their Pakistani driver, Khalid.