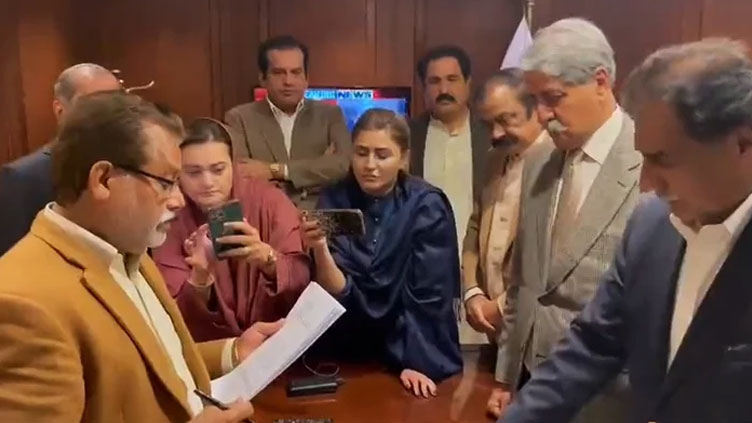 The opposition has also submitted a requisition to summon the National Assembly session in which the no-trust motion will be tabled.

PPP leader Naveed Qamar said the motion, which calls for the requisition of a National Assembly session, had signatures of more than 100 lawmakers. According to NA rules, in order for a session to be requisitioned to vote on a no-confidence motion, signatures from at least 68 MNAs are required.

In order to make the no-confidence motion against the prime minister successful, the joint opposition requires the support of 172 MNAs. After the filing of the motion, the NA speaker has between three to seven days to summon a session of the NA to conduct voting.

The 342-member National Assembly must have 172 votes for the no-confidence motion to ensure PM Imran Khan’s removal. The opposition claims they have the numbers needed, with Fazl adding that they have been aiming for the number of 180.

The joint opposition had also claimed that they have the support of 28 members of the PTI and others from coalition partners of the government.

PML-N, PPP and JUI-F have barred their respective lawmakers to remain in country as opposition has tabled the no-trust motion.

PML-N had claimed that 38 government members would support the no-confidence motion against PM.

The list of 38 government members of the assembly was sent to former prime minister and PML-N supremo Nawaz Sharif. The PML-N has also assured 10 parliamentarians of giving party tickets in the next elections.

Allies are with us, opposition should fulfill its desire of no-trust move: PM

Prime Minister Imran Khan said that all allies are with us and opposition should fulfill its desire of no-confidence motion.

The prime minister said that the members should have confidence in the members regarding no-confidence motion, adding that everything is fine. He said homework on the motion is complete and our number game is complete.