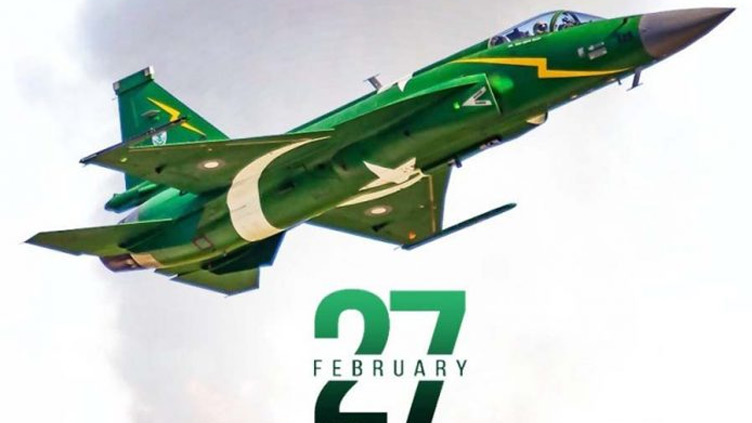 The Indian authorities code-named the attack on Balakot as "Operation Bandar".

ISLAMABAD (APP) - Three years after the downing of two Indian Air Force aircraft and capture of one pilot, the IAF is yet to recover from the humiliation at the hands of a far smaller adversary – the PAF which exposed to the world the inherent military weakness of a “nuclear-armed” India.

The Indian botched attempt to strike deep inside Pakistan following a false flag operation at Pulwama, and counter strike by the PAF on Feb 27 established its military and technological superiority, shattering to pieces the myth of Indian military might.

On 14 February 2019, a vehicle packed with explosives was drove into a convoy of 78 buses carrying Indian paramilitary police in Pulwama, killing 40 CRPF personnel. Moments after the attack the Indian media and government immediately blamed Pakistan before even the start of any investigation.

Prime Minister Khan promised to conduct an investigation, provided Delhi could provide any “actionable evidence.” He however also warned that Pakistan would “retaliate” if attacked. Nevertheless, the Indians opted to carry out an airstrike across the border on an imaginary terrorist training camp on the Pakistani side

The Indian authorities code-named the attack on Balakot as “Operation Bandar” to minimize the chances of leaking the news. The word “Bandar” was chosen because monkeys enjoy a sacred place in the Hindu religion and this refers to a tale in the religious myths of Hinduism where Hanuman – a deity who shows resemblance to the monkey – secretly entered Lanka and burned it to the ground.

The Indian Air Force launched an aerial strike near ‘Balakot’ On Feb 26, 2019, targeting a religious seminary that India described as a militant camp, and claimed killing more than 300 terrorists but without sharing any shred of evidence to corroborate the claims.

The well-rehearsed operation involving 20 Mirage 2000 aircrafts carrying Spice 2000 and Crystal Maze missiles had the support of Air Borne Early Warning systems. They failed to deliver their payload on the target despite practising on the simulator and pre-fed coordinates on the bombs.

According to Hindustan Times on February 26, 2019 at 3.45am the then Air Chief BS Dhanoa made a telephone call to National Security Adviser Ajit Doval on a secure fixed-line network and said “Bandar mara gaya” – “The monkey has been killed,” but at the end of the day, the reality proved that they just made a monkey of themselves.

Following the strike Prime Minister Imran Khan in a hard-hitting statement categorically said “India has committed uncalled-for aggression to which Pakistan shall respond at the time and place of its choosing … Armed Forces and the people of Pakistan to remain prepared for all eventualities.”

The Indian aircraft dropped their payload near a hillside, killing one crow and damaging a few precious pine trees, an act which prompted Prime Minister Imran Khan to repeatedly say that he was very hurt, as trees were very close to his heart. 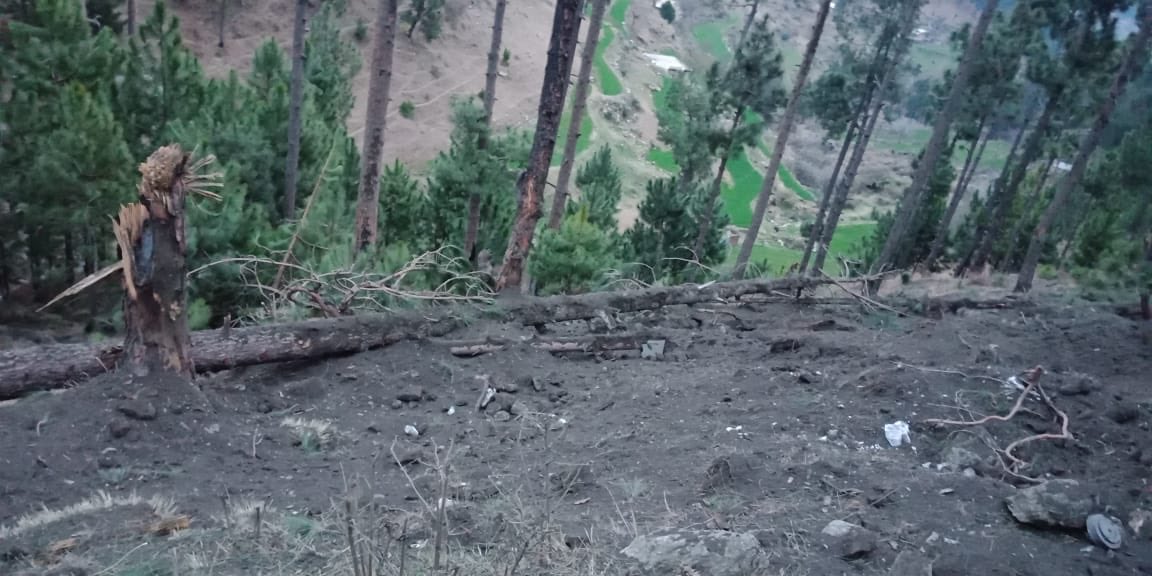 Military attache’ and foreign media also later visited the site and also went to the nearby madrassa of local village children, who were lucky enough to escape the Indian recklessness.

India claimed that its air force had managed to kill more than 300 terrorists while Pakistan but several international observers negated the claim as there were no casualties and the bombs had clearly missed the target, which in fact was not a terrorist camp, but an ordinary religious school, for the village children.

In response, Pakistan Air Force launched a counter-strike on Feb 27, 2019, intended primarily to demonstrate Pakistan’s resolve. The strike was carefully crafted to avoid casualties on the ground.

During the short aerial encounter that followed, PAF shot down two IAF aircraft and captured one of the pilots. The debris of the SU-30 fell in IOK and its pilot was killed, while the MiG-21 pilot Wing Commander Abhinandan Varthaman, whose aircraft fell on the Pakistan side was captured alive.

The success of the Pakistan Air Force in Operation Swift Retort against a far bigger adversary is now observed as a “Surprise Day” every year.

Hours later the jittery Indian Air Force IAF shot down its own Mi-17 helicopter with SPYDER air defense system killing six Air Force personnel and one civilian. India claimed that one of its Mig-21s shot down Pakistan’s F-16 aircraft which was also refuted by the influential Foreign Policy magazine based on interviews with the US Department of Defence (DoD) officials who verified that no F-16 was missing from the Pakistani inventory.

According to the magazine, Pakistan invited the US to physically count its F-16 planes after the incident as part of an end-user agreement signed when the foreign military sale was finalized.

Some of the aircraft were not immediately available for inspection due to the conflict, so it took US personnel several weeks to account for all of the jets, one US official said.

But now the count has been completed, and “all aircraft were present and accounted for,” the official said.”

While the Indian so-called surgical strike was being touted by India as a great success and declared as a ‘new norm’, but on the other hand, India’s senior leadership blamed the failure on the non-availability of aircraft like Rafale, which according to them would have changed the outcome of Balakot crisis.

Even the Indian Prime Minister Narendra Modi admitted the failure of his Air Force and while speaking at the India Today event said “Today, all of India is saying that if we had the Rafale, then the result would have been different.”

Pakistan’s response was intended to deter war and establish nuclear deterrence, the success of which could be gauged by the fact that India could not move up the escalation ladder and backed down. of one Indian pilot, Wing Commander Abhinandan Varthaman. The skirmish proved PAF’s air superiority over IAF but also restored conventional strategic balance between the two nuclear-armed powers.

On Feb 27, the military’s media wing said Pakistan Air Force had engaged six targets at the LoC. Maj Gen Ghafoor termed it a conscious decision not to attack any military target and avoid any collateral damage. He said one of the targets initially picked was a military administrative complex, however, the PAF command decided against hitting it.

“As a result of engaging our targets, no human life was affected. Staying within our jurisdiction, six targets were locked. And we carried out the strike,” he said.

He said the objective of the strikes was to show “we have the capacity and the will to respond, but we deliberately avoided the escalation path.”

“Pakistan is not pushing for war. We engaged our targets in open air, we deliberately avoided escalation. We could easily have taken the original targets, but we did not do that,” the DG ISPR said.

A day later Prime Minister Imran Khan in his address to a joint parliamentary session on Feb 28, 2019, said; “In our desire for peace, I announce that tomorrow, and as a first step to open negotiations, Pakistan will be releasing the Indian Air Force officer in our custody.” His decision was hailed by top world leaders as a great peace gesture.

Wing Commander Abhinandan was treated well, in line with the Geneva Conventions, provided new dress and of course the famous cup of tea, on which he had remarked: “Tea was Fantastic“. He was handed over to the Indian authorities on March 1, 2019 at the Wagah border.

Defence officials say Pakistan has credible conventional responses designed to meet different contingencies – known as the policy of ‘Quid Pro Quo Plus,’ which has not only reinforced the credibility of Pakistan’s nuclear deterrence but has also helped restore confidence in conventional deterrence.

After experiencing humiliation at the hands of PAF in Feb 2019, India has gone on yet another arms and ammunition shopping spree, without realising that it is in fact the man behind the machine and his strong nerves that matter.

However, the best sum up came from DG ISPR Major General Babar Iftikhar who while giving a recap of the Feb 2019 events had said;

“WE GAVE THEM A BLOODY NOSE AND IT IS STILL HURTING”