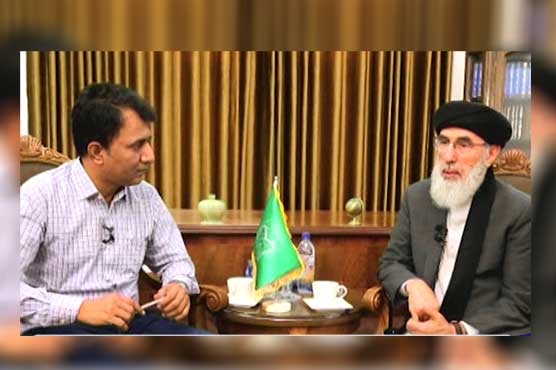 Talking exclusively to host Habib Akram on Dunya News program ‘Ikhtalafi Note’, the Hezb-e-Islami chief – while talking about the Panjshir issue – said that Pakistan was accused falsely with blaming support to the Taliban in Panjshir. “The people residing in Panjshir say that no plane was seen in the area where Fahim Dashti – a veteran leader of the Afghanistan National Journalist Union (ANJU) – was said to have died in a drone strike, although he was killed in a fight and his body was dumped, but no drone strikes were carried out in this area,” he added.

Gulbuddin Hekmatyar mentioned that although Pakistan had supported the entire US mission in Afghanistan and Prime Minister (PM) Imran Khan had already stated on record that Pakistan paid huge price due to this decision. “The foreign media was damaging Pakistan’s global image. In fact, Washington is not happy with Islamabad because Pakistan did not provide air bases for making prolong US war in Afghanistan. From this it could be inferred that an anti-Pakistan propaganda campaigns had been constantly run from Afghanistan. If the CIA chief comes to Afghanistan, there is no noise. When the Pakistani delegation comes, there is noise all over the world. From here, the double standard of the West can be gauged,” he explained.

He said that Pakistan had given its land to the refugees but there were many people in the government of Afghanistan who blamed Pakistan. “These people had also accomplices of the Soviet Union and they had been controlling media for 40 years. We should not rush to open embassies of other countries in Afghanistan,” he added.

The Afghan’s former premier said that the attitude of the US is discriminatory and started to impose various conditions on the Afghans. “The past three superpowers invaded Afghanistan and foreign powers imposed those governments which were not democratic. Our three former finance ministers and former presidents fled away after stealing money. Those who stole money should be caught and questioned, they should be punished and we have reservations about pardoning them.”

Gulbuddin Hekmatyar said that why the condition of inclusive government is imposed only on Afghanistan. “Whether former president Asif Ali Zardari and former premier Nawaz Sharif are part of the current government in Pakistan,” he questioned, adding that look at other countries in the region, including China, Russia and Iran, where there is only single party government.

“Unfortunately, the US facilitators in Afghanistan worked against the country. They still want a war in Afghanistan. I think we should not reconcile with such people now," he said.

The Hezb-e-Islami chief further said that the women of Afghanistan know their rights and the privileges of women cannot be denied. “Unfortunately, the Afghanistan we got has been destroyed in 40 years of war. In these circumstances, we need international aid and no country provides aid without conditions. Investors from all over the world want to invest in Afghanistan.”