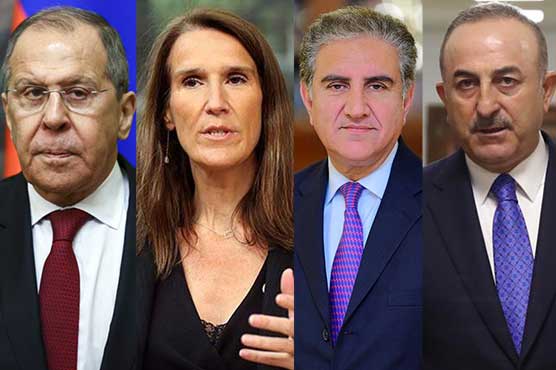 During the telephonic conversations with Belgian Deputy Prime Minister and Minister of Foreign Affairs Sophie Wilmès, the foreign minister said Pakistan is providing every possible assistance in early evacuation of staff of international organizations and diplomatic staff of different countries.

The Belgian Deputy Prime Minister thanked the Pakistani leadership for providing special assistance in the evacuation of Belgian diplomatic staff from Kabul.

He said in present situation, the security of Afghan citizens and the protection of their rights should be a top priority.

The foreign minister said Pakistan is committed to the early implementation of Stream Gas Pipeline Project with Russia.

In his conversation with Turkish FM Mevlut Cavusoglu, FM Qureshi exchanged views on bilateral relations and reviewed the latest situation in Afghanistan.

The Foreign Minister also apprised his Turkish counterpart of Pakistan’s facilitative role in evacuation of personnel of Embassies, international organizations, media entities and others.

The two Foreign Ministers agreed to coordinate closely on the situation in Afghanistan.

Both the leaders exchanged views on the rapidly changing situation in Afghanistan on phone call. During the telephonic conversation, FM Qureshi underscored that Pakistan will continue to play its constructive role in promoting sustainable peace and stability in Afghanistan.

He also expressed the hope that Afghan parties would work for an inclusive political settlement. He stressed on the importance of ensuring the safety, security and protection of the rights of Afghan people. “The success of negotiations in Kabul would not only benefit Afghanistan but also the region,” he added.

The minister emphasized that it was imperative for the international community to remain engaged with Afghanistan including by supporting the country’s economy, reconstruction, rehabilitation and humanitarian needs. “It was also important for the Muslim Ummah to show its traditional solidarity with the Afghan people in their quest for a peaceful, united, stable and prosperous Afghanistan.”

Noting the significance of efforts towards establishing an inclusive government, Shah Mahmood Qureshi warned about spoilers within and outside Afghanistan who wanted to take advantage of the situation in the country.

He highlighted the role played by Pakistan in facilitating the evacuation and relocation of personnel of diplomatic missions, international organizations, media and others from Afghanistan.

The foreign minister expressed the hope that the talks in Kabul would succeed, leading to an inclusive and participatory government that would bring lasting peace, progress and prosperity to Afghanistan.

The OIC secretary general apprised FM Qureshi of the extra-ordinary meeting of the OIC Executive Meeting that has been convened in Jeddah at the level of Ambassadors/Permanent Representatives tomorrow, August 22, 2021, to discuss the situation in Afghanistan.