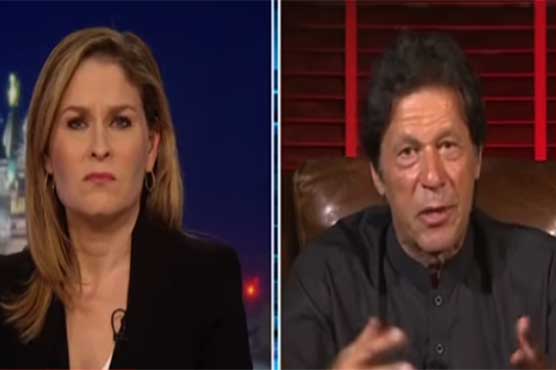 In an interview to Cable News Network (CNN) London-based anchor and correspondent Hala Gorani, Khan said that Pakistan, a country who collaborated with USA after 9/11 in war on terror, ended up in losing about more than 70,000 people and over a hundred billion dollars to the economy.

“After giving so much sacrifices and hearing that Pakistan has done nothing to stop terrorism is painful and humiliating for all the Pakistanis.

Responding to a question regarding Former US Ambassador to Afghanistan Zalmay Khalilzad who said roots of terrorists are in Quetta, Khan said that if Khalilzad knows the hideouts of terrorists then why he didn’t tell this to Pakistani government.

He asked is it plausible that there were hundred and fifty thousand NATO, and American troops in Afghanistan and they could not tackle small number of militants.

US cannot blame Pakistan for Afghanistan losses, he continued.

PTI chief said Pakistan has been biggest collateral damage in this Afghan adventure, adding all the political parties in Pakistan came together and implemented National Action Plan (NAP) which is to disarm the terrorists.

In a message to Donald Trump, he said US policy regarding Afghanistan is flop and advised him to change it by engaging the neighbours (China, Russia and Iran). He reiterated US should also leave Afghanistan because as long as they are in the country they will continue to create problems.

Arrange a dialogue with Taliban, he demanded.

Answering the a question related to his wish as Prime Minister of Pakistan, Khan said that he had a sportsman training due to which he is always optimistic.

I do feel this is our time now, he added.

US trip not cancelled, Pakistan can do without Washington aid: Kh Asif