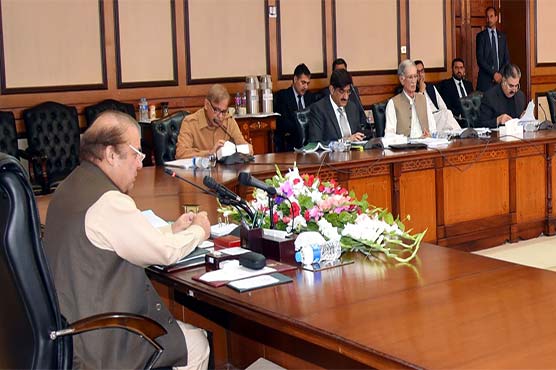 The premier chaired a meeting of National Economic Council (NEC) in the federal capital and gave a nod to the summary that recommended the federation to spend Rs 1,001 billion while the provinces to spend Rs 1,112 billion in the upcoming financial year over development projects.

While addressing the participants, PM Nawaz said that the government has shifted its entire focus to energy projects to overcome the crisis and urged the political parties to not let the development get derailed by politics.

“During Belt and Road Forum at China all the Chief Ministers accompanied me and the world saw that Pakistan unanimously stands for development and it was a very positive message that we are united,” the Prime Minister stated.

He said Pakistan’s economic indicators have significantly improved and this is acknowledged by international financial rating institutions.

He said the GDP growth rate of 5.28% for the current financial year is commendable. Pakistan is now among fastest growing economies, he added.

The Prime Minister informed the participants of the meeting that China-Pakistan Economic Corridor projects are on fast track.

He said the government is focusing on energy projects. He said not only power supply is priority of the Government but it is providing affordable power supply for consumers.

He said the government is also focusing on a balanced mix of sources for energy including LNG, Coal, Hydel, Solar and Wind.
Describing infrastructure as key to development, Nawaz Sharif said the Government is concentrating on roads and communication networks.

Nawaz Sharif noted that the present government has increased the provincial share in Public Sector Development Programme (PSDP) for the next financial year three times more as compared to 2012-13. FATA, Azad Kashmir and Gilgit-Baltistan are as important to Federal Government as all other provinces.

Presence of all CMs in China sent positive message to world: PM