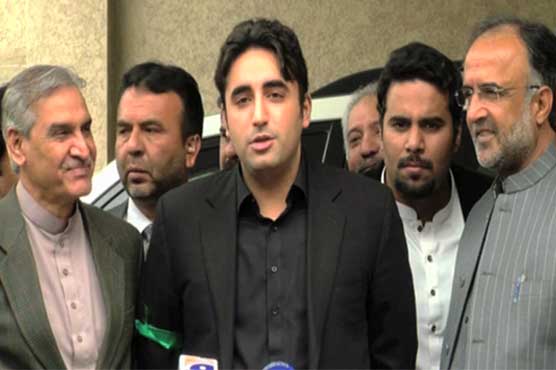 Bilawal said that Sindh and Balochistan both have reservations regarding population census.

PPP chairman visited Lahore to condole with the family of former senator Kazim Khan who passed away earlier this year. Kazim Khan was elected in 2009 on PPP ticket.

Speaking on the occasion, Bilawal Bhutto welcomed Prime Minister (PM) Nawaz Sharif’s decision of holding public gatherings in Sindh, but also showed his reservations in Punjab and said workers of PPP are being killed and attacked in the province. He demanded equal political rights for PPP in Punjab.

Bilawal further said that Sindh and Balochistan both have reservations regarding population census, but we do not want to make this matter controversial.

The chairman also opposed the ban that is put on social media by the government in which no one is allowed to talk against government. He said that this step of government is not democratic by any means as it represents ideology of dictators.

Lahore made no-go area for other parties: Bilawal