No, Ukrainians are not selling abandoned Russian tanks on eBay 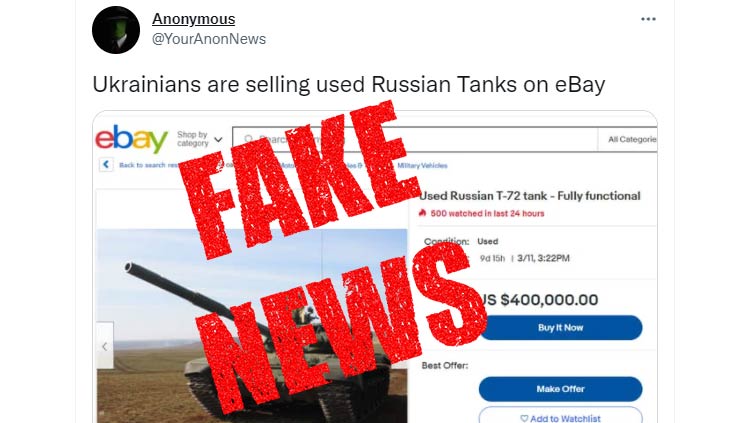 No, Ukrainians are not selling abandoned Russian tanks on eBay

(Reuters) - Posts suggesting people have found Russian tanks abandoned in Ukraine and are selling them on eBay are bogus. A screenshot appearing to show such a sale appears to be faked. Any such sale would go against company policy, eBay said.

Tens of thousands of social media users have shared a screenshot of an alleged sales listing on eBay, titled: “Used Russian T-72 tank – Fully functional” and which includes a picture of the tank. It pitches a “Buy it Now” price of $400,000.

“Ukrainians are selling used Russian tanks on eBay,”said one Twitter user on March 2. The tweet was liked 125,000 times.

In a now-deleted post, a Facebook user also claimed that the item description had stated the tank “must be picked up from Ukraine”.

Reuters was unable to find the listing seen in the social media screenshot. The photo used to advertise the tank can also be traced back to at least 2010.

An eBay spokesperson told Reuters that any such listings would go against company policy.

“It is not possible to sell tanks on eBay, as this would breach our Military Items policy, which prohibits even decommissioned military vehicles and weaponry,” the spokesperson said.

Reuters did find several other listings that, on the surface, appeared to be for Russian tanks.

The sellers who posted the first two advertisements told Reuters they are based in Britain and had no intention of selling tanks, but instead were fundraising to either help the Ukrainian military or refugees affected by the war. They have both since updated their item descriptions to make this detail clear.

The seller of a third listing has been approached for comment.

Two further listings that appear to advertise Russian tanks for sale are in fact toys, as confirmed by the seller and the description. It is not currently clear whether these are also being sold as part of a fundraiser.

False. There is no evidence that Ukrainians have been selling abandoned Russian tanks on eBay.