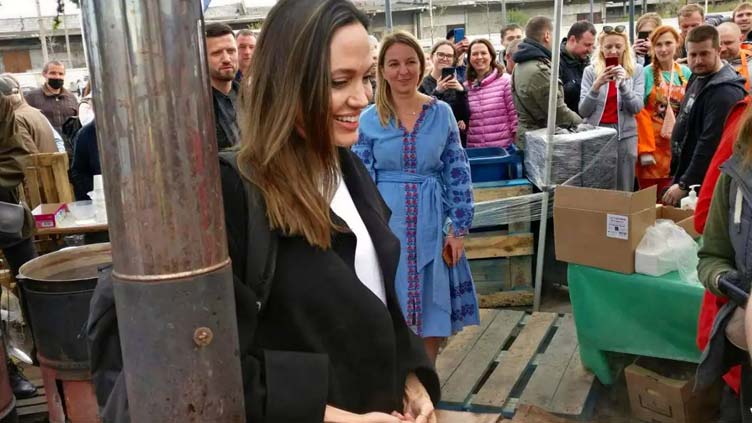 KYIV (AFP) - Hollywood star Angelina Jolie on Saturday made a surprise appearance in the western Ukrainian city of Lviv where she met displaced people and was spotted in a cafe.

Jolie is a UNHCR special envoy but it was not known if she was visiting the country in that capacity.

"For all of us, this visit has been a surprise," said Lviv regional governor Maxim Kozytski on Telegram, posting photos and videos of the actress playing with children and posing with voluntary workers.

At a hospital, she visited children injured in the bombardment of the Kramatorsk station, blamed on a Russian missile, in which more than 50 civilians trying to escape the under-fire east were killed, according to the governor.

Jolie also spoke to volunteers giving psychological help to many of the displaced and some of those who had fled.

Over 7.7 million people have been internally displaced since the Russian invasion on February 24. A further 5.4 million have left the country.

Later the dressed-down star was spotted in a Lviv cafe by Maya Pidhoretska who posted a video on Facebook.

"I am having a coffee and I see Angelina Jolie in Lviv," reported the surprised Lviv resident.