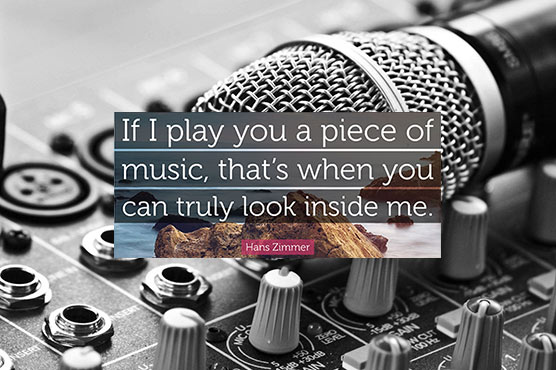 Here are ten themes and singles that are destined for eternity

(By Abdullah Ejaz) – Let us take a couple of moments to just sit back, relax and contemplate the perpetual influence of music in our daily lives on occasion of World Music Day today.

With days turning to months and months to years and years to irreversible aging, our lives are influenced by music in the most subtle as well as loud ways that we can imagine.

Music and arts, all of us would agree, drive a big chunk of our lives and on this World Music Day we humbly give back to the international community, the love, it has given us over the years.

Here are ten themes and singles that are destined for eternity:

(List-formatting is just a presentation, for those who rate art have sinned.)

Top Gun, the maverick that lives on

Backed by Mark Wahlberg as one of the executive producers, ‘Ballers’ starring Dwayne Johnson has many grooving to its track.

Breaking Bad: Music of the meth

Much like the telly series, its theme had become an instant sensation.

James Bond, too big a theme for a couple of movies. Had to make dozens

The theme has been a part of the James Bond franchise since 1962 production of Eon Productions, ‘Dr No’

Game of Thrones, it had to be listed here

Let’s go cliché because music will always be spellbinding

Indispensable addition to the world of movies, a theme from Harry Potter diaries

From days gone to days to come, Braveheart it is

For those who are to diss this compilation for incorporating content of western production houses and ignoring other industries, you made a hasty judgment.

‘The Salesman’ by Iranian Asghar Farhadi won the Oscar this year.

Trivia: Farhadi refused to attend the night as a protest against Trump’s travel ban. A woman colleague in attendance at the Oscars read out Farhadi’s thankyou note.

*The Iranian theme is a symbolic addition here, for diversity and acknowldgement of the musicians across the world, regardless of the lines drawn over geography and nature. Thankyou for adding to our lives in ways that you have.

Prince Harry: No royal wants to be king or queen