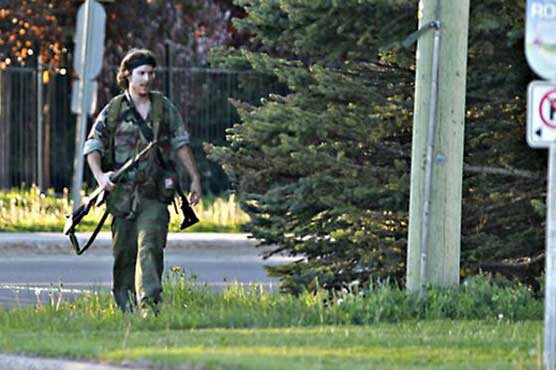 The incident took place in Moncton, the largest city in New Brunswick province.

The incident took place in Moncton, the largest city in New Brunswick province.

A third person was wounded and was being treated in hospital, the RCMP reported on Twitter.

Police said they were searching for a man they identified as Justin Bourque, whom they described as "armed and dangerous." They said he was in his 20s.

A manhunt was launched as night fell, with people in the area told to stay indoors and barricade their doors.

Moncton mayor George Leblanc said people who could not make it home should go stay with friends or relatives until further notice because the suspect was dangerous.

The RCMP police released a photo of the suspect dressed in military fatigues and carrying two firearms.

He was said to be hiding in a wooded area north of Moncton.