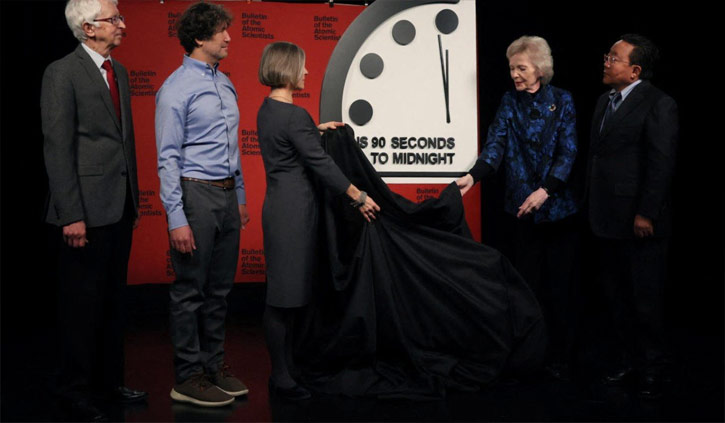 The new time reflects a world in which Russia's invasion of Ukraine revived fears of nuclear war.

WASHINGTON (Reuters) - Atomic scientists set the "Doomsday Clock" closer to midnight than ever before on Tuesday, saying threats of nuclear war, disease, and climate volatility have been exacerbated by Russia s invasion of Ukraine, putting humanity at greater risk of annihilation.

The "Doomsday Clock," created by the Bulletin of the Atomic Scientists to illustrate how close humanity has come to the end of the world, moved its "time" in 2023 to 90 seconds to midnight, 10 seconds closer than it has been for the past three years.

Midnight on this clock marks the theoretical point of annihilation. The clock s hands are moved closer to or further away from midnight based on scientists  reading of existential threats at a particular time.

The new time reflects a world in which Russia s invasion of Ukraine has revived fears of nuclear war.

"Russia s thinly veiled threats to use nuclear weapons remind the world that escalation of the conflict by accident, intention or miscalculation is a terrible risk. The possibilities that the conflict could spin out of anyone s control remains high," Rachel Bronson, the bulletin s president and CEO told a news conference in Washington on Tuesday.