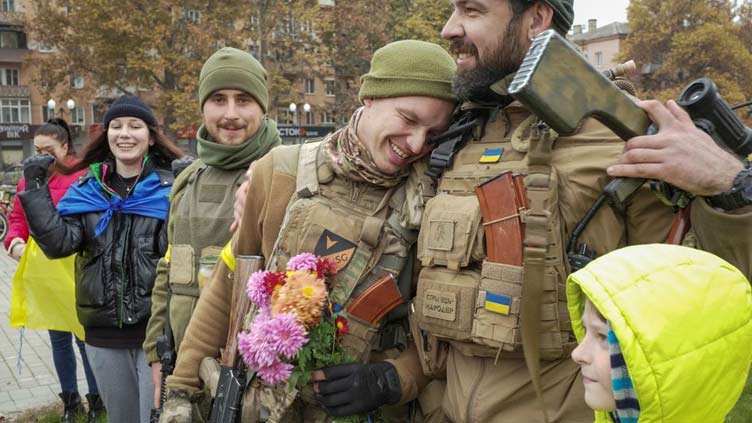 KLAPAYA (Reuters) - Villagers holding flowers waited on the road to the southern city of Kherson to greet and kiss Ukrainian soldiers on Saturday as they poured in to secure control of the right bank of the Dnipro River after a stunning Russian retreat.

Volleys of incoming and outgoing artillery fire continued to blast around Kherson s international airport and the police said they were setting up checkpoints in and around the city and sweeping for mines left behind by the Russians.

The mayor said the humanitarian situation was "severe" because of a lack of water, medicine and bread in the city where residents celebrated their liberation in what President Volodymyr Zelenskiy called a "historic day" on Friday.

In the hamlet of Klapaya, about 10 km from Kherson s center, Nataliya Porkhunuk, 66, and Valentyna Buhailova, 61, stood on the verge of a rutted track holding bunches of freshly-picked flowers, smiling, and waving at passing vehicles carrying Ukrainian troops.

"We ve become 20 years younger in the last two days," Buhailova said, just before a Ukrainian soldier jumped out of a small truck and hugged the pair.

Outside the village of Chornobayivka, close to Kherson, a Reuters reporter saw incoming Russian fire that looked like a cluster munitions strike at the nearby airport. A volley of outgoing fire followed from the Ukrainian side shortly after.

Reuters reporters were turned back by soldiers near Kherson s outskirts and told it was too dangerous to go further.

One officer was wounded while demining one of Kherson s administrative buildings, the police said.

"The city has a critical shortage, mainly of water," Mayor Roman Holovnia told television. "There is currently not enough medicine, not enough bread because it can t be baked: there is no electricity."

THE ROAD TO KHERSON

The road to Kherson from Mykolaiv was lined by fields containing miles of abandoned Russian trenches. A destroyed T72 tank lay with its turret tossed upside down.

The abandoned trenches were littered with refuse, blankets and camouflage netting. An irrigation ditch was filled with discarded Russian gear and several anti-tank mines were visible on the side of road.

In the hamlet of Klapaya, Porkhunuk recounted that for most of the past nine months, the village was occupied by pro-Moscow Ukrainian troops from the Russia-occupied region of Donetsk "who said they would not hurt us, and we should stay in our houses".

But for two weeks, Russian soldiers took over Klapaya and told villagers they were there to search for "Nazis, and Banderites, and American biolabs," she said, adding she had replied: "If you want to look for them, look elsewhere and go home."

Russians troops also warned that, "If we find that you are hiding any Ukrainian soldiers, we will level your home and the village," she continued. She said the invaders also looted homes whose residents had fled.

Moscow describes its actions in Ukraine as a "special military operation". It has made claims about dangerous far-right groups in Ukraine and unproven allegations Ukraine hosted U.S.-run bioweapons facilities.

Kyiv and its allies say Russia s invasion, which has killed tens of thousands and uprooted millions, was unprovoked and illegal.

In the nearby village of Kiselivka, a gaggle of teenagers stood on a dust-strewn corner with a sign made out of a cupboard door on which they had painted "Kherson" and an arrow pointing to a detour around a destroyed bridge on the main highway from Mykolaiv.

"We are here because we wanted to help in some way. So, a few hours ago, we made the sign," said Artem, 17. Villagers said the Russians left on Wednesday night. "They didn t fire any shots," recounted Hyhory Kulyaka, 54, who drove up on a scooter. "They were just gone."