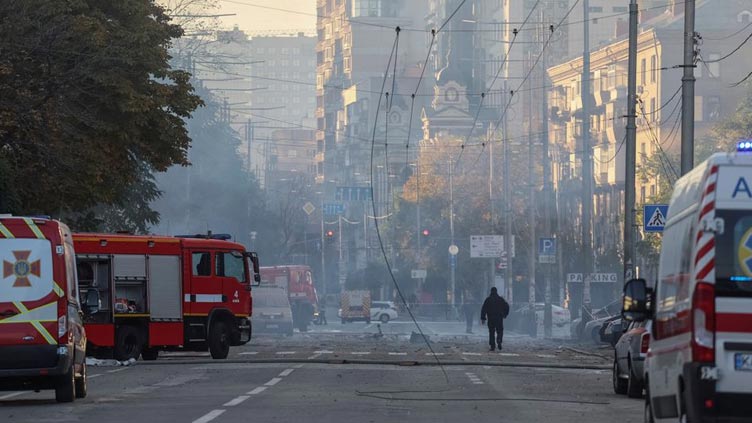 Soldiers fired into the air trying to shoot down drones.

KYIV (Reuters) - Russia attacked the centre of Kyiv during morning rush hour with drones on Monday and shelled other cities around the country, the second time in a week it has unleashed strikes across Ukraine while its forces face setbacks on the battlefield.

Soldiers fired into the air trying to shoot down drones after the blasts rocked central Kyiv. Residents fled for shelter. An anti-aircraft rocket could be seen streaking into the morning sky, followed by an explosion and orange flames.

Reuters later saw pieces of a drone used in the attack that bore the words: "For Belgorod" - an apparent reference to Ukrainian shelling of a Russian region bordering Ukraine.

The attacks came exactly one week after Russia unleashed its heaviest aerial bombardment of Kyiv and other Ukrainian cities since the start of the war - also during morning rush hour.

"All night and all morning, the enemy terrorizes the civilian population. Kamikaze drones and missiles are attacking all of Ukraine. A residential building was hit in Kyiv," President Volodymyr Zelenskiy said on the Telegram messaging app.

"The enemy can attack our cities, but it won’t be able to break us. The occupiers will get only fair punishment and condemnation of future generations. And we will get victory."

There was no immediate word on casualties from the blasts. Ukraine said the Kyiv attacks used Iran-made ‘suicide drones’, which fly to their target and detonate, which Russia has increasingly deployed in recent weeks.

Iran denies supplying drones to Russia. The Kremlin has not commented.

European Union foreign ministers meeting in Luxembourg may consider further sanctions on Iran if they can establish concrete evidence that it is supplying drones to Russia, the EU’s top diplomat Josep Borrell said.

Russia has accused Ukraine of hitting targets in Belgorod region near the border. Pro-Russian news sources on the Telegram social media app reported that Ukraine had struck Belgorod’s airport overnight. There was no immediate comment from Kyiv, which typically does not comment on incidents in Russia.

The plant, which has often been shelled during the war, is occupied by Russian forces but operated by Ukrainian staff.

In southern central Ukraine, a large fire broke out at an energy facility in the Dnipropetrovsk region after an overnight missile hit, a local official said. Ukraine also reported strikes that set ablaze a sunflower oil terminal in the southern port of Mykolaiv.

British military intelligence said on Monday Russia was facing more acute logistical problems in southern Ukraine after a blast on Oct. 8 caused damage to a road-and-rail bridge linking mainland Russia to Crimea, the peninsula annexed by Moscow in 2014.