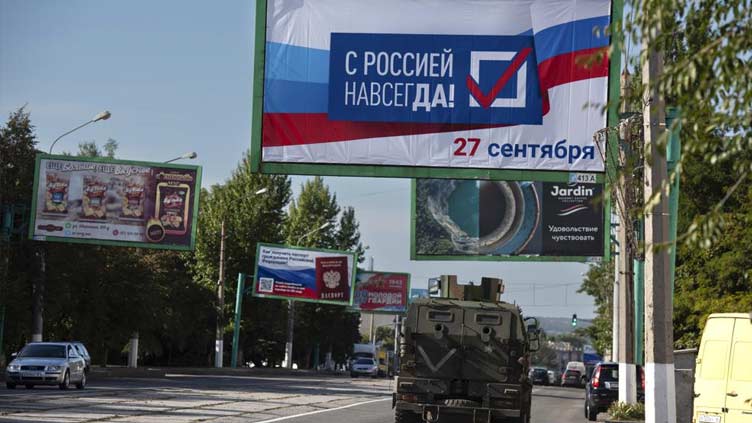 NATO member Turkey has tried to stay neutral throughout the seven-month conflict.

ISTANBUL (AFP) - Turkey on Saturday said Russia’s annexation of four Ukrainian provinces was a "grave violation" of international law and called for negotiations to end the conflict.

A foreign ministry statement said Ankara had not recognised Russia’s annexation of Crimea in 2014 and held the same stance after Russia on Friday declared Lugansk, Donetsk, Kherson and Zaporizhzhia part of its territory after referendums that were slammed globally as a sham vote.

"Turkey did not recognise Russia’s annexation of Crimea in an illegitimate referendum in 2014 and has emphasised its strong support to Ukraine’s territorial integrity, independence and sovereignty on every occasion," the ministry said.

It added it rejected the latest annexation "which constitutes a grave violation of the established principles of international law".

"We reiterate our support to the resolution of this war, the severity of which keeps growing, based on a just peace that will be reached through negotiations," the statement added.

NATO member Turkey has tried to stay neutral throughout the seven-month conflict and refrained from joining Western sanctions against Russia.

Ankara is dependent on Russian oil and gas while Turkish President Recep Tayyip Erdogan is keen to boost trade with Moscow as he tries to stabilise the battered economy in the run up to elections next June.

Erdogan met with Russian President Vladimir Putin on the sidelines of a regional summit in Uzbekistan last month.

But Turkey is now weighing whether to stop processing transactions made using Russia’s Mir payments system after receiving repeated warnings from the United States.

Washington has increased pressure on Turkish banks and businesses to comply with Western sanctions against Russia, warning that Turkish entities risked being exposed to secondary sanctions themselves.