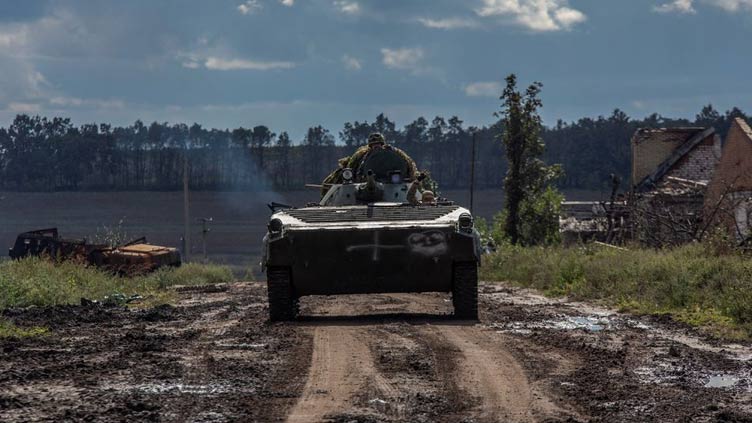 The seven-month war in Ukraine has killed tens of thousands

Citizens in four regions of Ukraine were voting for a fourth day on Monday in the Russian-organised referendums that Kyiv and the West have branded a sham. They say the outcomes are pre-determined and they will not recognise the results.

But by incorporating the four regions - Luhansk and Donetsk in the east and Zaporizhzhia and Kherson in the south - Moscow could portray Ukraine’s efforts to retake them as attacks on Russia itself, a warning to Kyiv and its Western allies.

U.S. National Security Adviser Jake Sullivan said the United States would respond to any Russian use of nuclear weapons against Ukraine.

"If Russia crosses this line, there will be catastrophic consequences for Russia," Sullivan told NBC television on Sunday. "The United States will respond decisively."

Sullivan did not say how Washington would respond but said it had privately told Moscow "in greater detail exactly what that would mean".

His comments followed Wednesday’s thinly veiled nuclear threat by President Vladimir Putin, who said Russia would use any weapons to defend its territory.

Asked at the weekend if Moscow would consider using nuclear weapons to defend annexed regions, Foreign Minister Sergei Lavrov said Russian territory, including that "further enshrined" in Russia’s constitution in the future, was under the "full protection of the state".

Ukrainian President Volodymyr Zelenskiy said he did not believe Putin was bluffing when the Kremlin leader said Moscow would be ready to use nuclear weapons to defend Russia.

Residents’ names were taken down if they failed to vote correctly or refused to cast a ballot, he said.

"Representatives of the occupation forces are going from apartment to apartment with ballot boxes. This is a secret ballot, right?" Gaidai said in an interview posted online.

The four regions represent about 15% of Ukraine. Russian forces do not control all the territory in those regions, where fighting still rages. They would add to Crimea, annexed by Russia in 2014 after a similar referendum there.

Voting ends on Tuesday and Russia’s parliament could then move swiftly to formalise the annexations.

That move has unleashed protests across Russia and sent many men of military age fleeing. Almost 17,000 Russians crossed the border into Finland over the weekend, Finnish authorities said on Monday.

More than 2,000 people have been detained across Russia for protests at the draft, says independent monitoring group OVD-Info. With criticism of the conflict banned, the demonstrations were among the first signs of discontent since the war began.

A 25-year-old gunman opened fire at a draft office on Monday in the Irkutsk region of Siberia, the local governor said.

In Russia’s Muslim-majority southern region of Dagestan, police clashed with protesters, leading to the detention of at least 100 people.

Ukraine’s presidential adviser Mykhailo Podolyak mocked Russia’s conscription drive on Monday in a tweet, listing among its features "kilometers-long queues to leave" and thousands of complaints "before the coffins begin to return".

In a Sunday video clip, Zelenskiy addressed Russian protesters directly: "Keep on fighting so that your children will not be sent to their deaths - all those that can be drafted by this criminal Russian mobilisation."

"Because if you come to take away the lives of our children ... we will not let you get away alive."

Separately, Zelenskiy said Ukraine had discovered two more mass burial sites containing the bodies of hundreds of people in the northeastern town of Izium, part of territory recaptured from Russian forces this month.

The seven-month war in Ukraine has killed tens of thousands, flattened towns and cities, fueled global inflation and triggered the worst confrontation between Moscow and the West since the 1962 Cuban missile crisis, when the United States and the Soviet Union came closest to nuclear conflict.

United Nations atomic watchdog chief Rafael Grossi said on Monday he was ready to hold talks in Ukraine and Russia this week on setting up a protection zone at the Russian-held Zaporizhzhia nuclear power plant in Ukraine. He says such a zone is needed urgently to prevent an atomic disaster.