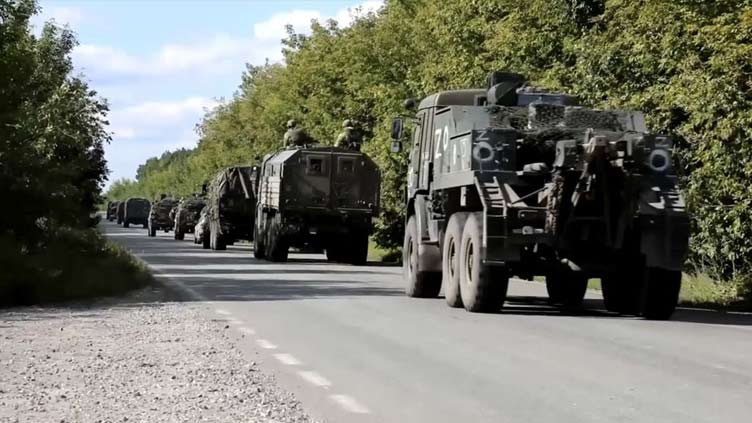 KYIV (Reuters) - Moscow abandoned its main bastion in northeastern Ukraine on Saturday, in a sudden collapse of one of the war’s principal front lines after Ukrainian forces made a rapid advance.

The swift fall of Izium in Kharkiv province was Moscow’s worst defeat since its troops were forced back from the capital Kyiv in March. Ukraine hailed it as a turning point in the 6-month-old war, with thousands of Russian soldiers leaving behind ammunition stockpiles and equipment as they fled.

Russian forces used Izium as the logistics base for one of their main campaigns - a months-long assault from the north on the adjacent Donbas region comprised of Donetsk and Luhansk.

The state-run TASS news agency quoted Russia’s defence ministry as saying it had ordered troops to leave the vicinity and reinforce operations elsewhere in Donetsk.

The head of Russia’s administration in Kharkiv told residents to evacuate the province and flee to Russia to "save lives," TASS reported. Witnesses described traffic jams of cars with people leaving Russian-held territory.

If the reported gains are held, it would be a serious blow for Russia, which Western intelligence services say has suffered huge casualties. It would also be a big boost for Ukraine, which is keen to show Western nations supplying it with weapons it deserves their continued support.

There is pressure on Kyiv to demonstrate progress before winter sets in, amid threats by Russian President Vladimir Putin to halt all energy shipments to Europe if Brussels goes ahead with a proposal to cap the price of Russian oil exports.

Ukraine’s Foreign Minister Dmytro Kuleba said in Kyiv that Ukrainian forces had demonstrated they were capable of defeating the Russian army with the weapons given to them.

"And so I reiterate: the more weapons we receive, the faster we will win, and the faster this war will end," he said.

In his nightly video address on Saturday, President Volodymyr Zelenskiy said Ukraine’s armed forces had recovered around 2,000 square kilometres (770 square miles) of territory since its counter-offensive was launched earlier this month.

"The Russian army is claiming the title of fastest army in the world ... keep running!" Andriy Yermak, Zelenskiy’s chief of staff, wrote on Twitter.

Ukrainian officials stopped short of confirming they had recaptured Izium, but Yermak earlier posted a photo of troops on its outskirts and tweeted an emoji of grapes. The city’s name means "raisin."

That left thousands of Russian troops abruptly cut off from supplies along a front that has seen some of the most intense battles of the war.

Igor Girkin, a former commander of pro-Russian forces in eastern Ukraine, called the Russian pullback "a major defeat" in remarks on Telegram.

Ukraine has for weeks been talking up a big counteroffensive in the south, which also is under way though details are sparse.

Russia still occupies extensive territory in the Donbas and in the south near the Crimean Peninsula it seized in 2014.

Days ago, Kyiv’s forces burst through the front line in the northeast and have since recaptured dozens of towns and villages in a swift mechanised assault, surging forward dozens of kilometres (miles) a day.

Ukraine’s deputy defence minister, Hanna Malyar, sounded a cautionary note, urging people not to report prematurely that towns have been "taken" just because Ukrainian troops were sighted. Troops entered Balakliia a few days ago, she said, but it was only on Saturday that Ukraine established control in the city.

In Hrakove, one of dozens of villages recaptured in the Ukrainian advance, Reuters saw burnt-out vehicles bearing the "Z" symbol of Russia’s invasion. Boxes of ammunition were scattered along with rubbish at positions the Russians had abandoned in evident haste.

"Hello everyone, we are from Russia," was spray-painted on a wall. Three bodies lay in white body bags in a yard.

The regional chief of police, Volodymyr Tymoshenko, said Ukrainian police moved in the previous day, and checked the identities of local residents who had lived under Russian occupation since the invasion’s second day.

"The first function is to provide help that they need. The next job is to document the crimes committed by Russian invaders on the territories which they temporarily occupied," he said.

‘FIGHTING IS GETTING CLOSER’

A witness in Valuyki, a town in Russia’s Belgorod region near the border with Ukraine, told Reuters she saw families from Kupiansk eating and sleeping in their cars along roads.

"I was at the market today and saw a lot of people from Kupiansk. They say half of the city was taken by the Ukrainian army and Russia is retreating ... the fighting is getting closer," the witness said.

Belgorod governor Vyacheslav Gladkov said officials were giving food and medical aid to people queuing at a crossing into Russia. Senator Andrey Turchak, from the pro-Kremlin United Russia party, reported more than 400 vehicles at the frontier.

Reuters could not independently confirm the battlefield accounts.

"The advance is enormous. There are sporadic battles, but mostly the occupiers are fleeing," Luhansk regional governor Serhiy Gaidai told Ukrainian television on Saturday.