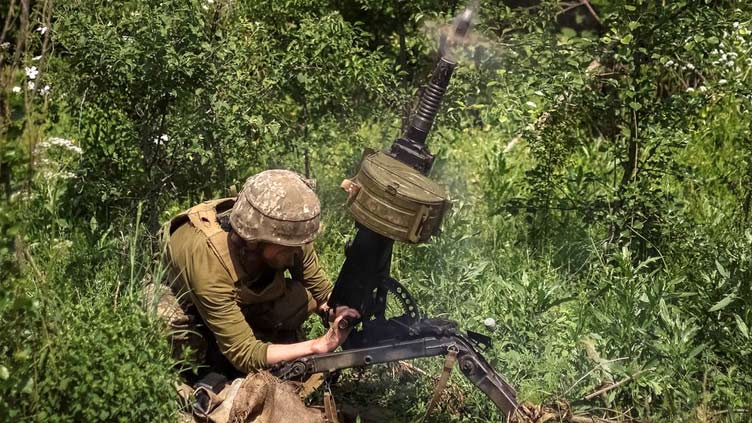 KYIV/DRUZHKIVKA (Reuters) - Ukraine will fight to recover all its territory occupied by Russian forces, President Volodymyr Zelenskiy said on Tuesday, as his troops struggled to hold their ground in bloody street-to-street fighting in the city of Sievierodonetsk.

"We have already lost too many people to simply cede our territory," Zelenskiy said by video link at an event hosted by Britain s Financial Times newspaper. "We have to achieve a full deoccupation of our entire territory."

Zelenskiy s remarks responded forcefully to suggestions that Ukraine must cede territory to Russia to end the war, now in its fourth month.

French President Emmanuel Macron said in a recent interview it was important not to "humiliate" Moscow, comments interpreted in Ukraine as implying it must accept some Russian demands.

Asked about Macron s comments, Zelenskiy said: "We are not going to humiliate anyone, we are going to respond in kind."

As he spoke, Ukrainian troops in the ruins of Sievierodonetsk were trying to cling to gains Kyiv said its forces had made in a surprise counter-offensive that shifted momentum there last week.

The governor of the Luhansk region, Serhiy Gaidai, said the defenders were finding it hard to repel Russian attacks in the centre of Sievierodonetsk, a small industrial city in the east.

"The Russians are trying with all their might to capture Sievierodonetsk and cut off the highway from Lysychansk to Bakhmut," he said in an online post. "In the regional centre it is hard to stave off the attacks, but the occupiers do not control the town."

Moscow said its troops have been advancing. Reuters could not independently verify the situation on the ground.

The fight for Sievierodonetsk has emerged as a pivotal battle, with Russia focusing its offensive might in the hope of achieving one of its stated aims - to fully capture surrounding Luhansk province on behalf of separatist proxies.

Ukrainian officials had said their forces staged a surprise counter-attack last week, driving the Russians from a swathe of the city centre.

Before that, Russia had seemed on the verge of encircling Ukraine s garrison in Luhansk, attempting to cut off the main road to Sievierodonetsk and its twin city Lysychansk across the Siverskiy Donets river.

Gaidai said in his post that Lysychansk was under constant bombardment.

Russia invaded Ukraine on Feb. 24 saying it aimed to "disarm" and "denazify" the country. Ukraine and its Western backers say Russia launched an unprovoked war to grab territory.

Russia s troops were defeated on the outskirts of the capital Kyiv in March and it has since regrouped and ramped up an assault on the east, demanding Kyiv recognise its territorial claim to the Crimea peninsula that Moscow annexed in 2014, and the claims of its separatist proxies in Luhansk and Donetsk, the southeastern provinces together known as the Donbas.

Russia has been pressing from three main directions - east, north and south - to try to encircle the Ukrainians in the Donbas.

In Druzhkivka, in the Ukrainian-held pocket of Donetsk province, residents were sifting through the wreckage of houses obliterated by the latest shelling.

Nadezhda picked up a pink children s photo album and kindergarten exercise book from the ruins of her house, and put them on a shelf somehow still standing in the rubble.

"I do not even know where to start. I am standing here looking but I have no idea what to do. I start crying, I calm down, then I cry again."

The Donetsk regional governor, Pavlo Kyrylenko, told Ukrainian television there was constant shelling along the front line, with Russia attempting to push towards Sloviansk and Kramatorsk, the two biggest Ukrainian-held cities in Donetsk.

Efforts were underway to evacuate remaining residents, he said: "People are now understanding, though it is late, that it is time to leave."

Ukraine s second city, Kharkiv, was also hit by shelling early on Tuesday, and the local mayor said one person was killed. The northeastern city came under intense bombardment in the first two months of the war, but had been quieter in recent weeks after Russian forces retreated in the region.

Viacheslav Shulga, an employee at a pizzeria in the north of Kharkiv that was hit, said there had been hopes the restaurant could reopen soon after shutting at the start of the war.

"Everything is destroyed. We are removing equipment, there will be no business here for now," he said. "It is sad as so much effort was invested in it. But someone else has decided our destiny."

Ukraine is one of the world s biggest exporters of grain, and Western countries accuse Russia of creating the risk of global famine by shutting Ukraine s Black Sea ports.

The governor of the region that included the port of Mykolaiv said weekend shelling had destroyed warehouses in one of the country s largest agricultural commodities terminals. read more

Russian Defence Minister Sergei Shoigu said the Russian-occupied Ukrainian ports of Berdyansk and Mariupol were ready to resume grain exports. Ukraine says any such shipments from territory seized by Moscow would amount to illegal looting.

The Kremlin said that for exports to resume from Ukrainian-held ports, Kyiv must first clear them of mines. Russia could then inspect and escort ships to international waters, Kremlin spokesperson Dmitry Peskov said.