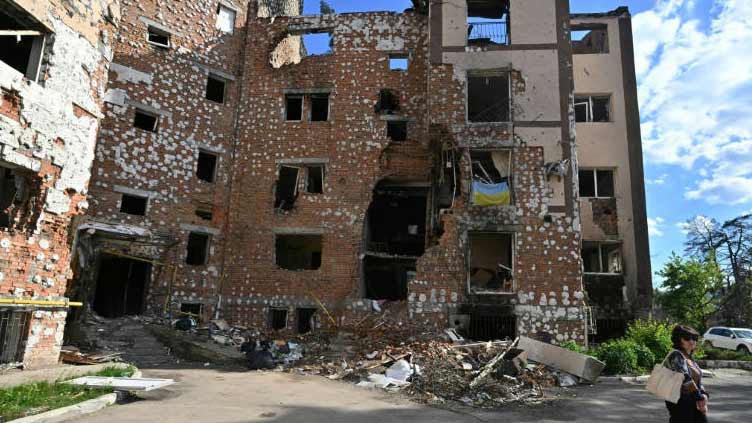 "Several explosions in Darnytsky and Dniprovsky districts of the city. Services are extinguishing," Mayor Vitali Klitschko said on Telegram shortly after air raid warnings sounded in Kyiv and several other cities.

"There are currently no dead from missile strikes on infrastructure. One wounded was hospitalised. The services are still working in the affected areas."

Separately, at least 11 civilians were reported killed in the Lugansk region where Severodonetsk is located, the nearby Donetsk region and in the southern city of Mykolaiv.

Cities in the eastern Donbas area at the heart of the Russian offensive were under "constant air strikes, artillery and missile fire" but Ukrainian forces were holding their ground, he said.

Severodonetsk is the largest city still in Ukrainian hands in the Lugansk region of the Donbas, where Russian forces have been gradually advancing in recent weeks after retreating or being repelled from other areas, including around the capital Kyiv.

"Our soldiers have managed to redeploy, build a line of defence," he said in an interview broadcast on Telegram Saturday.

"We are currently doing everything necessary to re-establish total control" of the city.

Earlier, Lugansk regional governor Sergiy Gaiday said the Russians had captured most of Severodonetsk, but that Ukraine’s forces were pushing them back.

"The Russian army, as we understand, is throwing all its power, all its reserves in this direction," said Gaiday.

"Russians are blowing up the bridges, so that we cannot supply reinforcements to our boys, who are in Severodonetsk," he added.

For its part, Moscow claims to have destroyed two Ukrainian command centres and six ammunition depots in the Donetsk and Lugansk regions.

"Ukrainian forces are successfully slowing down Russian operations to encircle Ukrainian positions in Luhansk Oblast as well as Russian frontal assaults in Severodonetsk through prudent and effective local counterattacks in Severodonetsk", the US-based Institute for the Study of War said in an assessment late Saturday.

Tens of thousands of people have been killed, millions forced to flee and towns turned into rubble since Russian President Vladimir Putin ordered an all-out assault on his pro-Western neighbour on February 24.

Western powers have imposed increasingly stringent sanctions on Russia and supplied arms to Ukraine, but divisions have emerged on how to react.

French President Emmanuel Macron said Friday Putin had committed a "fundamental error" but that Russia should not be "humiliated" so that a diplomatic solution could be found.

"It is Russia that humiliates itself. We all better focus on how to put Russia in its place," he said.

Despite diplomatic efforts, the conflict has raged in the south and east of the country.

Ukraine reported two victims from a Russian missile strike on Odessa in the southwest, without specifying if they were dead or wounded.

Russia’s defence ministry said it had struck a "deployment point for foreign mercenaries" in the village of Dachne in the Odessa region.

It also claimed a missile strike in the northeastern Sumy region on an artillery training centre with "foreign instructors".

Apart from the human toll, the conflict has caused widespread damage to Ukraine’s cultural heritage.

On Saturday, Ukrainian officials reported a large Orthodox wooden church, a popular pilgrim site, was on fire and blamed Russia.

Moscow continues to prove "its inability to be part of the civilised world," Culture Minister Oleksandr Tkachenko said in a statement.

Russia’s defence ministry blamed "Ukrainian nationalists" for the blaze and said its forces were not operating in the area.

Russian troops now occupy a fifth of Ukraine’s territory, according to Kyiv, and Moscow has imposed a blockade on its Black Sea ports, sparking fears of a global food crisis. Ukraine and Russia are among the top wheat exporters in the world.

The United Nations said it was leading intense negotiations with Russia to allow Ukraine’s grain harvest to leave the country.

Putin said Friday there was "no problem" to export grain from Ukraine, via Kyiv- or Moscow-controlled ports or even through Central Europe.

The UN has warned that African countries, which normally import over half of their wheat consumption from Ukraine and Russia, face an "unprecedented" crisis.

Food prices in Africa have already exceeded those in the aftermath of the 2011 Arab Spring uprisings and the 2008 food riots.

The head of the African Union, Senegalese President Macky Sall, said Saturday he intended to visit Ukraine after meeting with Putin the day before to discuss the wheat shortage.

Ukraine’s Defence Minister Oleksiy Reznikov repeated the government’s appeal for the swift delivery of heavy artillery in a telecast address to the Globsec-2022 forum on international security Saturday.

If Kyiv gets the equipment they had asked for, he said, "I cannot forecast definitely what month we will kick them out, but I hope -- and it’s absolutely a realistic plan -- to do it this year."

Away from the battlefield, Ukraine will be fighting for victory over Wales in Sunday’s play-off final as they aim to reach their first football World Cup since 1958.

"We all understand that the game with Wales will no longer be about physical condition or tactics, it will be a game of survival," said Ukraine player Oleksandr Zinchenko.

"Everyone will fight to the end and give their all, because we will play for our country."