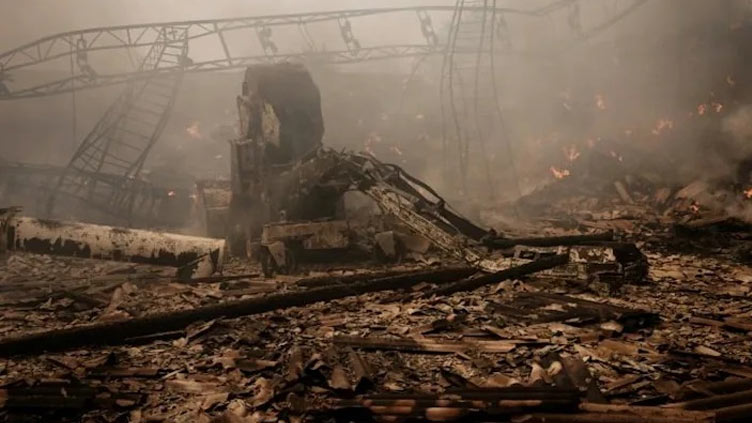 SEVERODONETSK (AFP) - A Russian strike on a school sheltering civilians claimed 60 lives, Ukraine said , as the G7 reaffirmed their unity with Kyiv on the eve of Moscow’s plans for a flashy World War II victory commemoration.

As intense fighting continued, Ukrainian President Volodymyr Zelensky confirmed the death toll in Saturday’s Russian air strike on a school in the eastern village of Bilogorivka. That would be one of the highest one-day tolls since Russia invaded on February 24.

Russian President Vladimir Putin leads commemorations Monday of the Soviet Union’s defeat of Nazi Germany, but Ukraine, under unrelenting attack, is desperate to deny Moscow any sense of military invigoration.

Putin is expected to flaunt Russia’s military might during the symbolically important event. Huge intercontinental ballistic missiles will be towed for official review through Moscow’s Red Square, and a planned flyover will feature fighter jets in a "Z" formation showing support for the war.

The Victory Day parade is a longtime tradition in Russia, but Monday’s has taken on great prominence as Putin seeks to justify a war that has gone on far longer -- and at far higher cost -- than expected.

Putin has sought to legitimise the invasion by comparing it with the previous struggle against Nazism and the national pride it brought.

"Today, our soldiers, as their ancestors, are fighting side by side to liberate their native land from the Nazi filth with the confidence that, as in 1945, victory will be ours," Putin said.

Zelensky also marked the end of the 1939-1945 war by comparing Ukraine’s battle for national survival to the region’s war of resistance against its former Nazi occupiers.

"Decades after World War II, darkness has returned to Ukraine, and it has become black and white again," he said, in a monochrome social media video shot before a bombed-out apartment block.

Zelensky said later in his nightly video address that the school attack showed "Russia has forgotten everything that was important to the victors of World War II."

In the latest shows of Western support, US First Lady Jill Biden and Canadian Prime Minister Justin Trudeau made unannounced visits to Ukraine, and G7 leaders joined Zelensky on a video call before pledging new backing -- including a key vow to ban or phase out imports of Russian oil.

After Zelensky’s video conference with G7 leaders, the group -- comprising Britain, Canada, France, Germany, Italy, Japan and the United States -- said in a statement that Putin’s "unprovoked war of aggression" had brought "shame on Russia and the historic sacrifices of its people".

The White House said the G7 was "committed to phasing out or banning the import of Russian oil".

But EU diplomats will meet again next week to hammer out details of their latest sanctions package, after a proposed embargo on Russian oil exposed rifts in the bloc.

Separately, the White House said the United States would slap sanctions on three major Russian television stations and deny all Russian companies access to US firms’ consulting and accounting services.

First Lady Biden met her Ukrainian counterpart Olena Zelenska at a school sheltering civilians, including children displaced by the conflict, near Ukraine’s border with Slovakia.

"I wanted to come on Mother’s Day," Jill Biden told reporters, saying she sought to demonstrate US support for Ukraine.

Meanwhile, depleted Ukrainian forces are bracing to defend their final bastion in the devastated port city of Mariupol.

An AFP reporter in the city of Zaporizhzhia said that eight buses carrying 174 civilians -- including 40 evacuated from Azovstal -- had arrived in that Ukrainian-controlled city.

"The latest information that I have from both Ukraine and Russia is that there are no more civilians there (Azovstal), but we are not in a position to verify. We weren’t inside the plant," Osnat Lubrani, the UN’s humanitarian coordinator in Ukraine, told AFP.

More than 600 civilians have now been safely evacuated from the steelworks and other areas of Mariupol, the UN said.

This leaves a small force of defenders holed up in Azovstal’s sprawling network of tunnels and bunkers.

"We hoped everyday for an evacuation," said Vladymyr Babeush, 41, an Azovstal evacuee who worked at the plant and was among those who arrived in Zaporizhzhia. "And now we are done waiting. We’re so thankful to everyone involved."

"I’m very tired. I was in the bus for about 17 hours. But I feel happy because there’s fresh air and I’m in Ukraine," said 17-year-old Azovstal evacuee Dmytro, who was wearing one of the plant’s workers uniforms.

The complex -- the final pocket of Ukrainian resistance in the city -- has taken on symbolic value.

Full control of Mariupol would allow Moscow to create a land bridge between the Crimean peninsula, which it annexed in 2014, and eastern regions run by pro-Russian separatists.

In one of those regions, Lugansk, Ukrainian forces are now mounting a last-ditch defence of Severodonetsk, formerly an industrial city of 100,000 people.

Lugansk region governor Sergiy Gaiday said rescuers in Bilogorivka were searching for survivors in the debris left by the Russian attack on the school there, though the outlook was bleak.

"Bombs fell on the school," he said on Telegram, "and unfortunately it was completely destroyed."

Civilians who escaped Mariupol describe passing through Russian "filtration" sites where several evacuees told AFP they were questioned, strip-searched, fingerprinted, and had their phones and documents checked.

"They asked us if we wanted to go to Russia... or stay and rebuild the city of Mariupol," said Azovstal evacuee Natalia, who asked that her full name not be published.

"But how can I rebuild it? How can I return there if the city of Mariupol doesn’t exist anymore?"

Whereas the Canadian Prime Minister Justin Trudeau said that Russian leader Vladimir Putin was responsible for "war crimes", during a visit to Ukraine where he met with President Volodymyr Zelensky.

"It is clear that Vladimir Putin is responsible for heinous war crimes," Trudeau said at a news conference with the Ukrainian leader.

"There must be accountability," he added, after a G7 meeting including the Ukrainian president.

Earlier in the day, Trudeau visited Irpin outside Kyiv, a city devastated by fierce fighting between Ukrainian and Russian forces before its occupation in March by Moscow, the city’s mayor said.

"I witnessed first-hand the brutality of Russia’s illegal war," he told reporters.

Irpin Mayor Oleksandr Markushyn posted pictures on an official social media channel with pictures of Trudeau writing that he "came to Irpin to see with his own eyes all the horror that the Russian occupiers had done to our city".

Trudeau’s visit came on the same day US First Lady Jill Biden made an unannounced trip to Ukraine.

Markushyn thanked the prime minister for "the support shown by Canada to Ukraine today".

"We believe in the continued cooperation between our countries for the reconstruction of Ukrainian cities after our victory," he added.

Irpin counted around 60,000 residents before Russian President Vladimir Putin launched his attack on Ukraine on February 24.

Ukraine accuses Russian forces of atrocities against civilians -- like those in Bucha, a town close to Kyiv -- after the discovery of dozens of bodies wearing civilian clothes in areas held then abandoned by the Russian army.

Several Western political leaders including UN Secretary-General Antonio Guterres have recently visited Irpin and other residential areas around the capital Kyiv where Russian forces were accused of killing hundreds of civilians.

It merits mention here that the G7 club of wealthy nations committed to phasing out its dependency on Russian oil and issued a scathing statement accusing President Vladimir Putin of bringing "shame" on Russia with his invasion of Ukraine.

The statement from the Group of Seven -- France, Canada, Germany, Italy, Japan, Britain and the United States -- did not specify exactly what commitments each country will make to move away from Russian energy.

But it was an important development in the ongoing campaign to pressure Putin by crippling Russia’s economy, and underscores the unity of the international community against Moscow’s actions.

"We commit to phase out our dependency on Russian energy, including by phasing out or banning the import of Russian oil. We will ensure that we do so in a timely and orderly fashion, and in ways that provide time for the world to secure alternative supplies," the joint statement said.

"This will hit hard at the main artery of Putin’s economy and deny him the revenue he needs to fund his war," the White House said.

The announcement came as the G7 held its third meeting of the year on via video conference, with Ukrainian President Volodymyr Zelensky participating.

The West has so far displayed close coordination in its announcements of sanctions against Russia, but has not moved at the same pace when it comes to Russian oil and gas.

The United States, which was not a major consumer of Russian hydrocarbons, has already banned their import.

But Europe is far more reliant on Russian oil. The European Union has already said it is aiming to cut its reliance on Russian gas by two-thirds this year, though Germany has opposed calls for a full boycott, with member states continuing intense negotiations.

The G7 also slammed Putin personally for his actions in Ukraine.

The Russian president’s "unprovoked war of aggression" against its Eastern European neighbor has brought "shame on Russia and the historic sacrifices of its people," the group said in its statement.

"Russia has violated the international rules-based order, particularly the UN Charter, conceived after the Second World War to spare successive generations from the scourge of war," the statement continued.

The date of G7 meeting is highly symbolic: Europeans commemorate the end of World War II in Europe on May 8.

The meeting also comes on the eve of the May 9 military parade in Russia, which marks the Soviet Union’s victory over Nazi Germany.

Washington also announced a new round of sanctions against Russia in a White House statement on , focusing on two major areas: the media, and access by Russian companies and wealthy individuals to world-leading US accounting and consulting services.

"US companies should not be in the business of funding Russian propaganda," said a senior White House official who requested anonymity, stressing that these media were directly or indirectly controlled by the Kremlin.

Another line of attack by Washington: banning the provision of "accounting, trust and corporate formation, and management consulting services to any person in the Russian Federation," according to the White House.

Those services are used to run multinational companies, but also potentially to circumvent sanctions or hide ill-gotten wealth, the White House official said.

The official stressed that while the Europeans had the closest industrial links with Russia, the United States and the United Kingdom dominated the world of accounting and consulting, notably through the "Big Four" -- the four global audit and consulting giants Deloitte, EY, KPMG and PwC.

Washington has also announced new bans on the export of American products to Russia, covering a range of capital goods from bulldozers to ventilation systems and boilers.

The United States announced on that it would impose visa restrictions on 2,600 Russian and Belarusian officials, as well as sanctions against officials of Sberbank and Gazprombank.