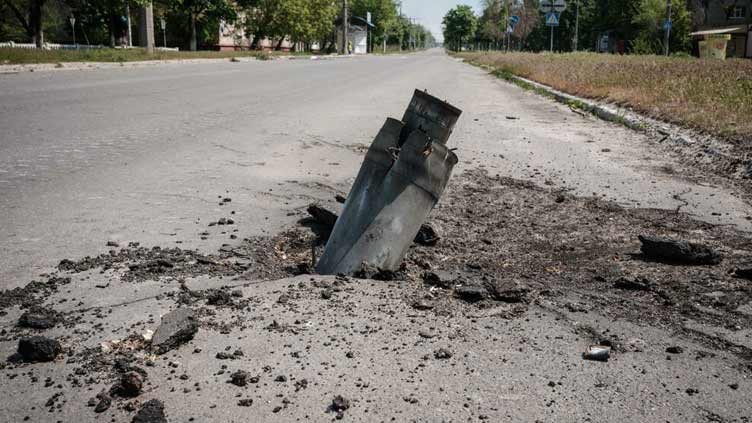 If the city falls on Sunday, it would mean the Kremlin has gained de facto control of Lugansk.

SEVERODONETSK (AFP) - The dozen jumpy and exhausted soldiers cowering under a bridge from incoming shellfire formed Ukraine’s last line of defence against Russia’s assault on this easternmost city still held by Kyiv.

Behind them lay the smouldering remains of what was once a 100,000-strong industrial hub filled with Soviet-era apartment towers and a major chemicals plant.

But their eyes were trained on a field on the opposite side of the bridge from which the Russians had spent the night firing missiles at the last defenders of Severodonetsk.

If the city falls on Sunday, it would mean the Kremlin has gained de facto control of Lugansk -- the smaller of the two republics comprising the Donbas war zone -- in time for Russia’s annual Victory Day celebrations on Monday.

The heavily-armed combat soldiers manning the underpass on the northern edge of the city were anxiously shouting commands into their walkie-talkies next to a burnt-out van.

A few anti-tank missiles lay next to a kettle they kept over an open fire to fill their thermoses with tea.

The eerily empty road leading toward the Russians was strewn with the twisted remains of munitions and power lines ripped off their posts by incessant blasts.

The soldiers looked too tired to put on a brave face.

"I would rather not guess how long we can hold on. All I can say is that we are here now," said their unit commander under condition that his name not be used on security grounds.

"The best way to describe the situation? Critically stable," he said with a sardonic laugh.

A clear pattern has emerged on Ukraine’s eastern front in the third month of Russia’s assault on its pro-Western neighbour.

Ukrainian units are counterattacking and making gains to the east of the northern city of Kharkiv.

But the Russians are chewing up territory roughly 100 miles (160 kilometres) to the southeast of the Ukrainian push.

The two forces are converging for an even bigger battle that could determine if the Russians can capture Ukraine’s eastern administration centre in Kramatorsk.

The frontlines are shifting across open fields and valleys dotted with industrial towns and rural settlements that have lost almost all links to the outside world.

Severodonetsk has been transformed into a moonscape of roads filled with craters and buildings charred by mortar and missile attacks.

Some locals braved the fighting to try and knit together the ripped power lines by climbing their wooden poles.

"We have had no power or water for two weeks," said welder Gennady Lastovets while waiting for a car that promised to evacuate his 81-year-old father.

"But I honestly have no idea how the war is going," the 55-year-old said. "There are rumours, but we have no internet, no phone service."

All Galina Abdurashikova knew was that she was still alive after crawling out barefoot from under a missile strike on her apartment and then spending the next five days alone in an abandoned car.

But 65-year-old was slowly losing hope.

"I have nothing to eat or drink. I had a bottle of water, but not anymore and my mouth is dry," she whispered.

Her beat-up Lada was the lone vehicle left on a major street running through an industrial zone in which no one -- neither soldiers nor civilians -- seemed willing to step outside.

"Now I am not afraid of anything anymore," she said of the bangs that erupted every few seconds from various part of the city as she spoke.

"At first I was afraid that those things would would kill me, but now I am not afraid. If it hits me, it hits me."

The city is now run by a civil-military administration that operates out of a building that once housed more than half a dozen US and European relief agencies.

But the foreign aid workers were forced to comply with evacuation orders issued by their respective governments before the war broke out on February 24.

The remaining volunteers -- including a few from Europe -- feel abandoned and betrayed. Much of their work now depends on support from Ukrainian soldiers who help sort and distributed the food.

"They fled and they never looked back," British humanitarian aid volunteer Philip Ivlev-York fumed while showing off the looted office of one of the European relief agencies.

City administration chief Oleksandr Stryup was busy in the building’s basement leafing through papers to determine where to send the remaining supplies.

A salvo of missile-defence fire from a fortified position in front of the building shattered his concentration and forced him to look up from his desk.

"The situation is getting tenser because the attacks are becoming more frequent," Stryup conceded.

"They are trying to take the city. And we are defending it."