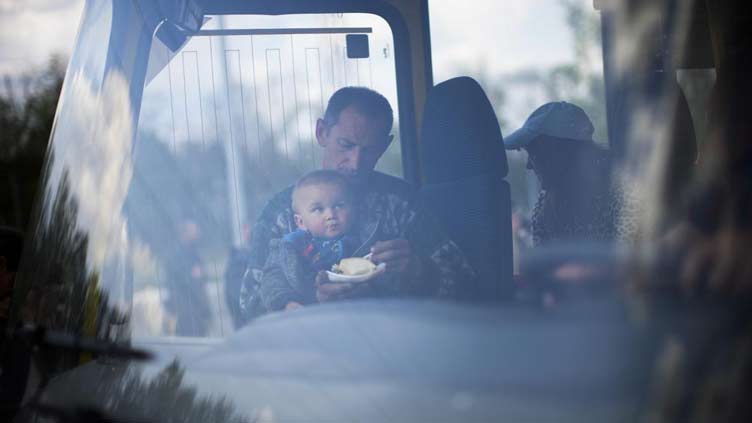 ZAPORIZHZHIA (AP) — People fleeing besieged Mariupol described weeks of bombardments and deprivation as they arrived Monday in Ukrainian-held territory, where officials and relief workers anxiously awaited the first group of civilians freed from a steel plant that is the last redoubt of Ukrainian fighters in the devastated port city.

Video posted online Sunday by Ukrainian forces showed elderly women and mothers with small children climbing over a steep pile of rubble from the sprawling Azovstal steel plant and eventually boarding a bus.

More than 100 civilians from the plant were expected to arrive in Zaporizhzhia, about 140 miles (230 kilometers) northwest of Mariupol, on Monday, Ukrainian President Volodymyr Zelenskyy said. “Today, for the first time in all the days of the war, this vitally needed green corridor has started working,” Zelenskyy said Sunday in a video message.

The evacuation, if successful, would represent rare progress in easing the human cost of the almost 10-week war, which has caused particular suffering in Mariupol. Previous attempts to open safe corridors out of the Sea of Azov city and other places have broken down, with Ukrainian officials repeatedly accusing Russian forces of shooting and shelling along agreed-upon evacuation routes.

Zelenskyy said he hoped more people would be able to leave Mariupol in an organized evacuation on Monday. The city council told residents wanting to leave to gather at a shopping mall, though it said that buses to take them out of the city had yet to reach the gathering point. As in the past when official evacuations faltered, some people managed to escape under their own steam, though others remain trapped.

“People without cars cannot leave. They’re desperate,” said Olena Gibert, who was among those arriving an a U.N.-backed reception center in Zaporizhzhia in dusty and often damaged private cars. “You need to go get them. People have nothing.”

She said many people still in Mariupol wish to escape the Russia-controlled city but can’t say so openly amid the atmosphere of constant pro-Russian propaganda.

Anastasiia Dembytska, who took advantage of the brief cease-fire around the evacuation of civilians from the steel plant to leave with her daughter, nephew and dog, told The Associated Press her family survived by cooking on a makeshift stove and drinking well water.

She said could see the steel plant from her window, when she dared to look out.

“We could see the rockets flying” and clouds of smoke over the plant, she said.

At least some of the people evacuated from the plant on Sunday were apparently taken to a village controlled by Moscow-backed separatists. The Russian military said Monday that some chose to stay in separatist areas, while dozens have left for Ukrainian-controlled territory. The information could not be independently verified.

In the past, Ukrainian officials have accused Moscow’s troops of forcibly relocating civilians from areas they have captured to Russia; Moscow has said the people wanted to go to Russia.

Zelenskyy told Greek state television that remaining civilians in the Mariupol steel factory were afraid to board buses because they believe they will be taken to Russia. He said he had been assured by the United Nations that they would be allowed to go to areas his government controls.

Mariupol has come to symbolize the human misery inflicted by the war. A Russian siege has trapped civilians with little access to food, water and electricity, as Moscow’s forces pounded the city to rubble in the face of stiffer than expected Ukrainian resistance.

Bolstered by Western arms, Ukrainian forces also thwarted Moscow’s attempt to take Kyiv in the opening weeks of the war, have denied Russia full control of the skies, and even struck Russia at sea, sinking the flagship of its Black Sea fleet last month.

Ukraine’s military claimed Monday to have destroyed two small Russian patrol boats in the Black Sea. Drone footage posted online showed what the Ukrainians described as two Russian Raptor boats exploding after being struck by missiles. The AP could not immediately independently confirm the strikes.

Meanwhile, the British Defense Ministry said Monday that it believes more than a quarter of all the fighting units Russia has deployed in Ukraine are now “combat ineffective” — unable to fight because of loss of troops or equipment.

In the face of setbacks, President Vladimir Putin has shifted his focus to the Donbas, Ukraine’s eastern industrial heartland, where Moscow-backed separatists have been battling Ukrainian forces since 2014 — possibly hoping success there will give him a victory to show the Russian people.

Russia says its military has struck dozens of military targets in the region in the past day alone. But Ukrainian and Western officials claim Moscow’s troops are using indiscriminate weapons that are taking a heavy toll on civilians and are making only slow progress.

Mariupol, which lies in the Donbas, is key to Russia’s campaign in the Donbas. Its capture would deprive Ukraine of a vital port, allow Moscow to establish a land corridor to the Crimean Peninsula, which it seized from Ukraine in 2014, and free up troops for fighting elsewhere in the region.

In the wake of the evacuation from the city’s steel plant, Russian forces resumed shelling there Sunday, according to one of the Ukrainian defenders.

“Several dozen small children are still in the bunkers underneath the plant,” Shlega said.

Before the weekend evacuation, about 1,000 civilians were believed to be in the the sprawling, Soviet-era steel plant, along with an estimated 2,000 Ukrainian fighters. As many as 100,000 people overall may still be in Mariupol, which had a pre-war population of more than 400,000.

On Monday, the Russian Defense Ministry said its forces struck dozens of military targets in eastern Ukraine in the past 24 hours, including concentrations of troops and weapons and an ammunition depot near Chervone in the Zaporizhzhia region, which lies west of the Donbas.

The information could not be independently verified. The Ukrainian president’s office said at least three people were killed and another seven, including a child, were wounded in the Donbas in the last 24 hours. The regional administration in Zaporizhzhia said that at least two people died and another four were wounded in Russian shelling.

A full picture of battle unfolding in eastern Ukraine is hard to capture. The fighting makes it dangerous for reporters to move around, and both sides have introduced tight restrictions on reporting from the combat zone.

Ukraine, meanwhile, said Russia struck a strategic road and rail bridge west of the Black Sea port of Odesa on Monday. The bridge already was heavily damaged in previous Russian strikes, and its destruction would cut a supply route for weapons and other cargo from neighboring Romania.

The attacks on the bridge followed a claim by a senior Russian military officer that Moscow aims to take control of the entire south of Ukraine and build a land corridor to Transnistria, a separatist region of Moldova where about 1,500 Russian troops are based. Ukrainian and Western officials have voiced concern that Russia could use the region to open a new front in the war.

Hundreds of millions of dollars in military assistance has flowed into Ukraine during the war, but Russia’s vast armories mean Ukraine still needs massive support. Zelenskyy has appealed to the West for more weapons, and tougher economic sanctions on Russia.

U.S. House Speaker Nancy Pelosi and other U.S. lawmakers visited Zelenskyy on Saturday to show American support. On Monday, the delegation met with Polish President Andrzej Duda and lawmakers in Warsaw to express gratitude for the country’s support of Ukraine.

European Union energy ministers met Monday to discuss a new set of sanctions, which could include restrictions on Russian oil — though Russia-dependent members of the 27-nation bloc including Hungary and Slovakia are wary of taking tough action.

After flood disaster in suburbs of Quetta, electricity and gas could not be restored