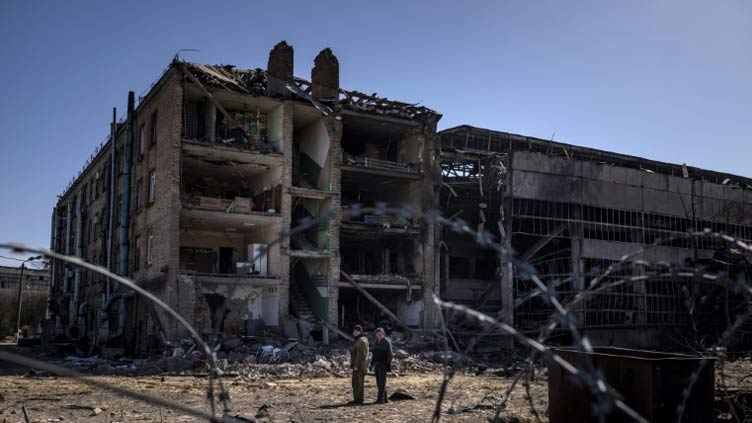 KYIV (AFP) - Russia stepped up air strikes on Kyiv on Saturday, hitting another military factory a day after Moscow warned it would renew attacks following two weeks of relative calm in the Ukrainian capital.

Smoke rose from the Darnyrsky district in the southeast of the capital after what Moscow said were "high-precision long-range" strikes on the armaments plant.

Kyiv mayor Vitali Klitschko said authorities were still determining whether anyone had been killed or injured in the attack.

A heavy police and military presence was deployed around the factory, the day after a similar strike on a plant that produced the Neptune missiles Kyiv and Washington say sunk Russia’s Black Sea naval flagship on Thursday.

Russia, which used sea-based long-range missiles to hit the Vizar plant on Friday, says that the Moskva missile cruiser sank while being towed back to port after ammunition exploded on board.

"This step was taken as a response to London’s unbridled information and political campaign aimed at isolating Russia internationally, creating conditions for restricting our country and strangling the domestic economy," the foreign ministry said in a statement.

"The British leadership is deliberately aggravating the situation surrounding Ukraine, pumping the Kyiv regime with lethal weapons and coordinating similar efforts on the behalf of NATO," the ministry said.

Saturday’s strike on the Ukrainian capital was among the first since invading Russian forces began withdrawing from regions around Kyiv last month, instead turning their focus on gaining control of the eastern Donbas region.

Kyiv regional governor Oleksandr Pavliuk said there were at least two other Russian strikes on the city Friday and that civilians thinking about returning should "wait for quieter times."

Residential areas of Kyiv were struck repeatedly at the beginning of Russia’s invasion of Ukraine from late February. Moscow has denied intentionally striking civilian infrastructure.

A Pentagon official said that the sinking of the Moskva, which had been leading Russia’s naval effort in the seven-week conflict, was a "big blow" for Moscow, while the fate of its crew of more than 500 was uncertain.

The official said survivors were observed being recovered by other Russian vessels, but Ukrainian authorities said bad weather had made rescue operations impossible.

"It’s a big blow symbolically," the Pentagon official said. "There is a pride aspect."

Losing the Moskva -- one of just three Slava-class cruisers in Moscow’s fleet -- creates a "capability gap" for the Russian navy in southern Ukraine, he said.

Under the Montreux convention Turkey keeps the Bosphorus and Dardanelles straits closed to warships in times of conflict, meaning Moscow cannot dispatch a replacement for the Moskva to the Black Sea.

Russia’s Black Sea fleet has been blockading the besieged port city of Mariupol, where Russian officials say they are in full control although Ukrainian fighters are still holed up in the city’s fortress-like steelworks.

The United States pledged a new $800-million military aid package for Ukraine this week, including helicopters, howitzers and armoured personnel carriers, and on Friday the German government said it plans to release more than a billion euros ($1.1 billion) in aid as well.

US media reported that Russia had sent a formal complaint to Washington about its support of Kyiv this week.

In the diplomatic note, Moscow warned the United States and NATO against sending the "most sensitive" weapons, saying such shipments were "adding fuel" to the situation and could come with "unpredictable consequences", the Washington Post reported.

"They could do it, I mean they can," Zelensky told CNN. "For them, life of the people is nothing."

This would allow Moscow to create a southern corridor to the occupied Crimean peninsula, and Ukrainian authorities have been urging people in the region to quickly move west in advance of a large-scale Russian offensive.