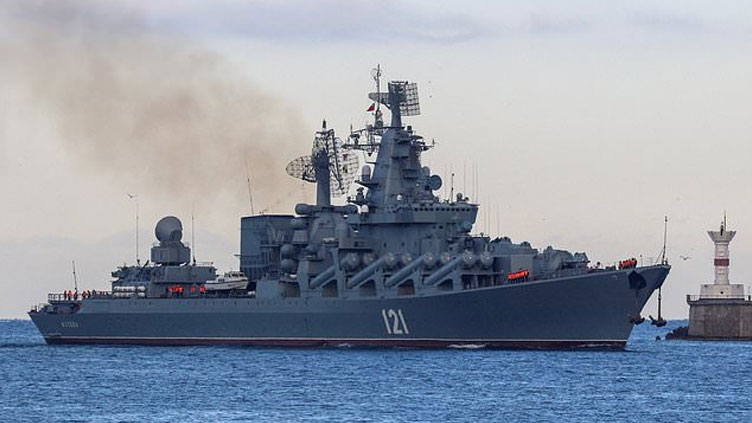 With the war entering its seventh week, US President Joe Biden announced an $800-million military aid package for Ukraine that included helicopters and armoured personnel carriers.

And international prosecutors said the conflict has turned Ukraine into a "crime scene", suggesting that those responsible could one day face prosecution.

It was unclear what caused the explosion on the Moskva missile cruiser, with both sides giving conflicting reports.

Russia’s defence ministry was quoted as saying the damage was caused by ammunition detonating "as a result of a fire", adding that the cause of the blaze was being investigated.

But a spokesman for the Odessa military administration, Sergey Bratchuk, said on Telegram that "according to available data, the cause of the ‘serious damage’ was ‘Neptune’ domestic cruise missiles".

The governor of Odessa also said Ukrainian forces had hit the vessel with missile strikes, while presidential advisor Oleksiy Arestovych said "we don’t understand what happened".

Moscow’s Black Sea fleet is blockading Mariupol and off the coast of Odessa, and its ships have been used to bombard coastal cities.

The Moskva gained notoriety early in the war when it called on Ukrainian border troops defending the strategic Snake Island to surrender, only to be defiantly refused.

It was previously deployed in the Syria conflict where it served as naval protection for the Russian forces’ Hmeimim airbase.

The crew had been evacuated, the Russian defence ministry told state media, but "the ship was seriously damaged".

Having initially expected to swiftly overcome its neighbour, Russia has faced fierce resistance and now even reprisals in its own territory -- leading Moscow Wednesday to threaten to strike command centres in Kyiv if Ukraine continues to launch attacks on Russian soil.

The warning sparked alarm in Kyiv, which had been experiencing some respite after Russian forces withdrew from the region after failing to secure the capital.

It had been believed that Moscow was refocusing its war aims to the south and east of the country, with Ukrainian authorities warning of bloody new clashes to come in the eastern Donbas region.

The aid package unveiled Wednesday by the United States includes armoured personnel carriers and helicopters, as well as some equipment Washington had previously refused to send to Ukraine for fear of escalating the conflict with nuclear-armed Russia.

The Pentagon said it was looking to provide Ukraine with weapons that would "give them a little more range and distance," as the country prepares for an escalation of violence.

No electricity, no water

More than 40,000 people have left the country in the past 24 hours in a desperate attempt to flee the expected offensive, the United Nations said Wednesday.

This brings those displaced abroad to 4.6 million since the conflict began.

The anticipated Russian onslaught is an apparent attempt to create an unbroken corridor from occupied Crimea to Donbas, where Russian-backed separatists control the Donetsk and Lugansk regions.

Part of that push involves taking the key southern port of Mariupol, which Ukrainian forces have struggled to hold and where President Volodymyr Zelensky estimates "tens of thousands" of civilians have died.

Also in the crosshairs is Severodonetsk -- the last easterly city still held by Ukrainian forces -- where residents have endured heavy shelling as they pledge not to flee.

About 400 civilians have been buried there since the war began, according to the Ukrainian governor of the Lugansk region Sergiy Gaiday, with locals now grimly awaiting the Russian attack.

"There’s no electricity, no water," resident Maria, who lives with her husband and mother-in-law, told AFP. "But I prefer to stay here, at home. If we leave, where will we go?"

"The bombings? It’s like this all the time," Maria said as explosions thundered in the distance.

‘Our citizens are murdered’

In areas that Russian forces have withdrawn from, officials and residents are piecing together the extent of the devastation left behind.

The Hague-based International Criminal Court, which deals with rights abuses, has dispatched investigators to Ukraine and told reporters the country had become a "crime scene."

"We’re here because we have reasonable grounds to believe that crimes within the jurisdiction of the court are being committed," the ICC’s chief prosecutor Karim Khan said on a visit to Bucha, a town now synonymous with scores of atrocities alleged to have been committed by Russian troops.

Officials in Bucha say more than 400 people were found dead there, with 25 rapes reported.

In nearby Gostomel, up to 400 people are unaccounted for, said regional prosecutor Andiy Tkach.

"Our citizens are murdered and we must bury every person in the right way," said Igor Karpishen, loading the truck.

On Wednesday Ukrainian prosecutors accused soldiers of shooting six men and one woman in a home in the occupied southern village of Pravdyne the day before.

Another four civilians were killed in Russian strikes on the second city of Kharkiv on Wednesday, local authorities said.

These and other alleged atrocities have led Biden to accuse President Vladimir Putin of genocide -- a claim dismissed as "unacceptable" by the Kremlin.