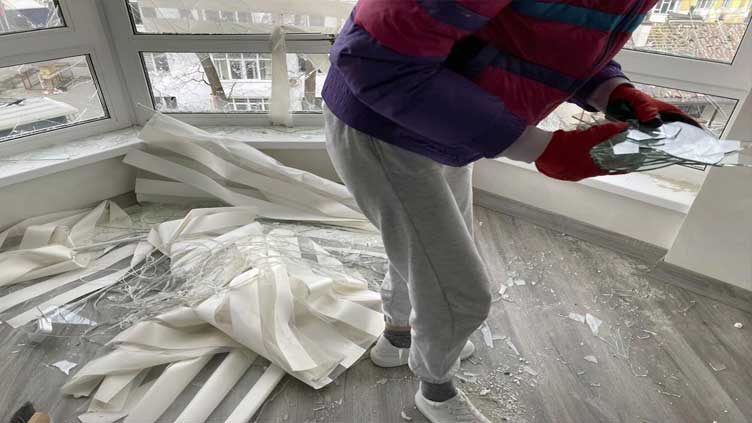 IRPIN (AP) — Pounding sounds came from a sixth-floor window, along with the risk of falling glass. For once, it was not destruction in the Ukrainian town of Irpin, but rebuilding. Heartened by Russia’s withdrawal from the capital region, residents have begun coming home, at least to what’s left.

Irpin just weeks ago saw desperate scenes of flight. Terrified residents picked their way across slippery planks of a makeshift bridge after a concrete span was destroyed by Ukrainian forces to slow the Russian advance. But on Monday, a long line of cars waited to cross a recently improvised bridge allowing access between the town and the capital, Kyiv.

The early returnees are among the 7 million Ukrainians displaced inside their country by the war. They are crossing paths with the elderly and others who waited out Russia’s assault in cold, damp basements, numbed by the sounds of shelling, and who have emerged into a landscape of ruined tanks and splintered homes.

In colorful Irpin apartment blocks where cafes and salons are still silent, there are the first signs of life amid the shattered glass and scorched walls. It feels like a turning point, even as police officers with flashlights continue to walk through near-empty buildings, looking for bodies and mines.

Upstairs and down a darkened hallway, Olexiy Planida worked to place a sheet of plastic over a large window facing a damaged playground. This was his first time home since he fled with his wife, two small children and their dog. The remains of breakfast, including a half-eaten bowl on a high chair, were where they left them. Nearby pots of flowers had wilted. A stuffed toy lay amid broken glass.

“It hurts,” the 34-year-old Planida said. The Russians broke open all the apartment doors and took a laptop, iPad and jewelry. He’s sure it was the Russians because local thieves pick the locks instead.

“I think for a couple of years it can’t be fixed,” he said of Irpin’s homes, many of which have suffered similar damage or worse.
He hopes his children, ages 2 and 4, will never see their home the way it is now. He hopes they’ll never remember the war itself, which he and his wife have tried to explain in the gentlest of terms.

“We’re just talking to them like, ‘Hey, some bad guys came to us,’” he said. “They shouldn’t see such things.” Even he was shocked by the ruins in parts of Irpin and in Bucha nearby.

Down the hallway, Oksana Lyul’ka cleared the broken glass from her living room floor, using work gloves to carry pieces as large as dinner plates.

Just months ago the 28-year-old had returned to Ukraine from Cyprus to start a new life closer to home, and she renovated the apartment. Now the structural damage alone is a concern, along with her missing jewelry.

She had arrived at the apartment an hour earlier. Downstairs, she cried.

She fled Irpin on the second day of the war and moved in with her parents. Now she is based in Kyiv, not so far away.

“We can’t make plans for now,” she said. “Our plan is to win the war, and then we will decide what to do with the apartment. It’s not that important now.”

Because the Russians remain in Ukraine they complicate any real recovery, she said. “We all feel pain and it’s hard and it’s terrible, but people are suffering, people are dying, and this is the main problem.”

Near the slowly reviving bridge linking Irpin to the capital, dozens of cars that had been abandoned by fleeing residents were being placed in rows. Some were burned. Some were smashed. Some had the remnants of their owners’ last seconds before giving up and going on foot: a coffee thermos. Face masks. Glove compartments left open, documents scattered.

Now people are showing up at the lot to look for what they left behind.

Not all find it. One man sat on the curb, holding two photographs, and wept. His brother was gone.