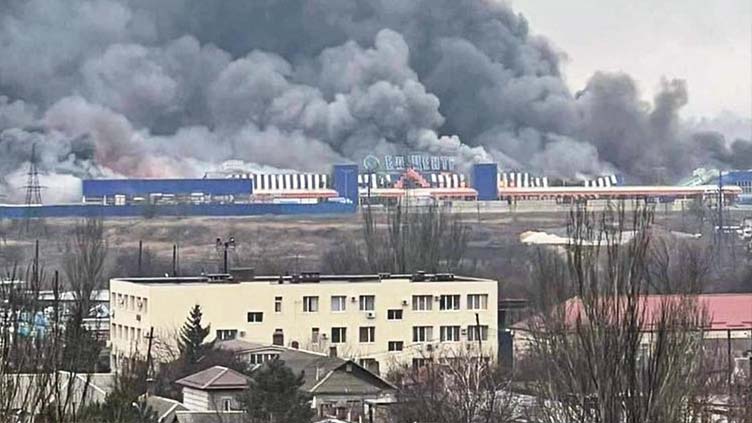 BUCHA (AFP) - Global outrage at accusations of Russian war crimes in Ukraine mounted Sunday with the discovery of mass graves and corpses in streets near Kyiv, as President Volodymyr Zelensky directly blamed leaders in Moscow for the "torture" and "killings" of civilians.

Britain, France, Germany, the United States, NATO and the United Nations all voiced horror at the reports of civilians being murdered in Bucha, northwest of the capital, with the atrocities prompting vows of action at the International Criminal Court.

With a grisly cleanup occurring near Kyiv and Ukraine accusing Russian forces of an onslaught, Moscow launched attacks Sunday on multiple cities as it shifts its war focus towards eastern and southern Ukraine.

In the country’s second-largest city Kharkiv, in the east near the Russian border, seven people were killed and 34 wounded after Russian forces struck a residential area, a local prosecutor’s office said on Telegram.

Ukrainian prosecutor general Iryna Venediktova said 410 civilian bodies were recovered from areas around Kyiv recently retaken from Russian forces, who have partially withdrawn from the region.

AFP saw at least 20 bodies, all in civilian clothing, strewn across a single Bucha street in a scene that has drawn global shock.

Russia denied the accusations and said Ukraine staged footage of the corpses.

But Zelensky pointed the finger squarely at Moscow and said he has created a "special mechanism" to investigate Russian "crimes" in Ukraine.

"I want all the leaders of the Russian Federation to see how their orders are being fulfilled," Zelensky said in a video address late Sunday.

"There is a common responsibility. For these killings, for this torture, for arms blown off by blasts... For the shots in the back of the head," Zelensky added, switching from Ukrainian to Russian.

"What did the town of Bucha do to your Russia?"

Bucha’s mayor Anatoly Fedoruk told AFP that 280 bodies were placed in mass graves because it was impossible to bury them in cemeteries within firing range.

One rescue official said 57 people were found in one hastily dug trench behind a church.

About 10 were either unburied or only partially covered by earth.

"We found people with their hands and with their legs tied up... and with shots, bullet holes, in the back of their head," he told the BBC.

"They were clearly civilians and they were executed."

Workers in Bucha were seen Sunday using knives to cut free the bound wrists of dead victims, putting several corpses into body bags and loading them into a van.

US Secretary of State Antony Blinken called the killings "a punch to the gut", while NATO chief Jens Stoltenberg said the violence -- unseen in Europe for decades -- was "horrific" and "absolutely unacceptable".

Britain, France, Germany, Italy and the European Union all called for those responsible to be brought to book at the international tribunal in The Hague, while the EU vowed further sanctions against Moscow.

UK Prime Minister Boris Johnson said Russia’s "despicable attacks" against civilians in Irpin and Bucha were "evidence that (President Vladimir) Putin and his army are committing war crimes in Ukraine".

Russia’s defence ministry pushed back Sunday, saying "not a single local resident" in Bucha suffered violence, accusing Ukraine of bombarding its southern suburbs and falsifying images of corpses in "another production" for Western media.

Europe’s worst conflict in decades, sparked by Russia’s invasion on February 24, has already left some 20,000 people dead, according to Ukrainian estimates.

Nearly 4.2 million Ukrainians have fled the country, with almost 40,000 pouring into neighbouring countries in the last 24 hours alone, the UN refugee agency said.

AFP journalists saw women, children and elderly people boarding a train at the station to flee the eastern city of Kramatorsk in the Donbas region as Moscow refocuses its offensive on southern and eastern Ukraine.

"The rumour is that something terrible is coming," said Svetlana, a volunteer organising the crowd on the station platform.

Pope Francis, on a visit to Malta Sunday, made a plea for refugees fleeing the "sacrilegious war" in "tormented Ukraine" to be welcomed.

Several Western leaders, including US President Joe Biden, have already accused Putin of being a war criminal.

"We were woken up by the first explosion, then we saw a flash in the sky, then another, then another. I lost count," local man Mykola, 22, told AFP.

UK Defence Intelligence said Sunday recent Russian air activity had been concentrating on southeastern Ukraine, "likely as a result of Russia focusing its military operations in this area".

But it said Russia was struggling to find and destroy air systems, which has "significantly affected their ability to support the advance of their ground forces".

The governor of the east Ukrainian town of Rubizhne said Russian forces fired on a local hospital, leaving one person dead, while officials said a Russian strike on Mykolaiv killed one and injured 14.

The attacks came as top UN humanitarian envoy Martin Griffiths arrived Sunday in Moscow before an expected visit to Kyiv to seek a halt to the fighting.

On peace negotiations, Russia’s chief negotiator Vladimir Medinsky said it was too early for a top-level meeting between Zelensky and Putin.

He said Kyiv had become "more realistic" in its approach to issues related to the neutral and non-nuclear status of Ukraine, but a draft agreement for submission to a summit meeting was not ready.

Ukraine has proposed abandoning its aspirations to join NATO and declaring official neutrality, if it obtains security guarantees from Western countries.

It has proposed temporarily shelving the question of Crimea, annexed by Russia in 2014, and two breakaway territories in the Donbas that Russia has recognised as independent.

Medinsky said Russia’s position on Crimea and the Donbas "remains unchanged" and that talks resume by video Monday.